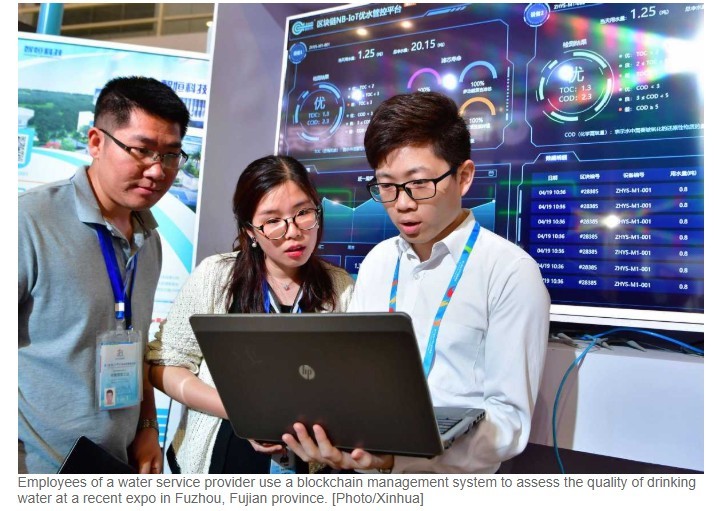 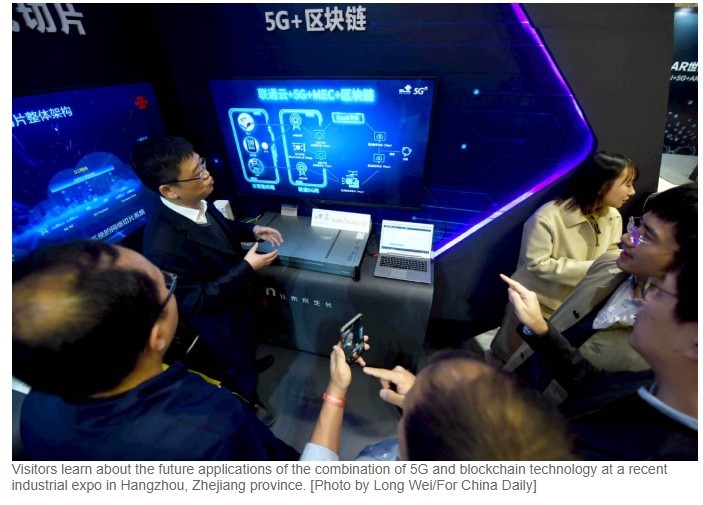 China is bullish on the blossoming blockchain sector, seeing it as the next frontier for national competitive advantages as well as a digital future.

As one of the first major countries to acknowledge the potential of the blockchain technology, China is ramping up efforts to push toward global dominance over blockchain, the underlying technology behind digital currencies like bitcoin and a wide range of applications.

Xi’s speech unleashed a wave of activity and now the country is in the midst of a blockchain boom.

Experts and entrepreneurs believe the government’s strong support for blockchain technology will boost the future development of the sector, but cautioned that it is necessary to be rational and not hype the concept.

Combining the application of distributed data storage, encryption algorithms and other advanced technologies, blockchain offers an open and decentralized database of any transaction involving money, goods and property among others. It provides a high level of security by creating a record whose authenticity can be verified by the whole community.

Wei Kai, deputy director of the Cloud Computing and Big Data Research Institute of the China Academy of Information and Communication Technology, said as wealth and talent pour into the blockchain sector, the technology will be applied to a wide range of real-world scenarios.

“The government’s strong support will further standardize and develop blockchain in China. The development of blockchain will also empower the financial sector and the real economy, as it will help improve efficiency, reduce operating costs and build a more efficient credit system,” Wei said at the recent Trusted Blockchain Summit 2019 in Beijing.

Wei noted that blockchain technology will be a new frontier of innovation in various fields, including cross-border payments, global trade, logistics, supply chain, finance, government affairs, intellectual property protection, food traceability and invoicing.
In fact, China is at the forefront globally in terms of blockchain development, as the country is leaping ahead in terms of blockchain patent filings, said a recent report released by the China Academy of Information and Communication Technology.

As of July 25, 2019, there were more than 18,000 blockchain patent applications globally, of which China accounted for more than a half of the total. Among the top 20 global corporate applicants, Alibaba and China Unicom have gained the top spot and fifth place respectively.

The report showed 2,450 blockchain companies had been set up globally as of August 2019, mainly in the fields of cryptocurrency and blockchain technology research and development. The United States topped all other countries in terms of the number of blockchain companies, followed by China and the United Kingdom.

The blockchain boom is sweeping across the whole nation. As of May 2019, more than 30 provinces, municipalities and autonomous regions had issued guidance to develop blockchain technology, such as Beijing and Shanghai, as well as Guangdong, Jiangsu and Guizhou provinces, said the report.
”

The major reasons for the emergence of this new technology were to solve the trust problem between multiple agents, reduce costs for communication and improve efficiency for collaboration,” said Wei from the CAICT.

However, Wei noted that blockchain technology is at an early stage of development.
“We still face problems such as the lack of supervision, immature technologies and the hiatus between demand for, and supply of, blockchain talents,” Wei added. “As we are driving to a blockchain future, we need to stay rational and not hype the blockchain concept. Not all scenarios require blockchain, and we should find the right direction.”

China’s blockchain spending is estimated to see rapid growth in the coming years, according to a recent report by global research firm IDC.

Jeff Xie, senior market analyst at IDC Asia-Pacific, said the adoption rate of blockchain technology has been growing at a steady pace.

“Use cases leveraging on blockchain are maturing as well, filtering out the overhyped or solutions overselling the technology from the implementations where blockchain brings value to ecosystems,” Xie said in the report.

“The technology is here to stay, organizations need to assess the benefits that blockchain can bring to the business like the way it assesses other emerging technology, and identify realistic areas of implementation where the technology can reduce costs and increase efficiency. With proper analysis, leveraging the adoption of blockchain can assist organizations to enhance their digital transformation journey,” Xie added.

Seeing the big potential of the blockchain sector, many tech companies are gearing up to expand blockchain-related business, and many have already made considerable progress.

“Cryptocurrency is just one among the many applications of blockchain,” Li said. “With the government’s strong support, blockchain companies, experts and institutes will accelerate their push for making breakthroughs in the underlying technologies and overcoming the current technological bottlenecks, which will definitely inject new impetus into the whole industry.”

According to him, more efforts are needed to integrate blockchain with cloud computing, big data, the internet of things and other new technologies to deal with real-world problems, and Tencent will continue to explore applications in blockchain games, supply chain finance, blockchain-based invoicing and more.

Chinese blockchain giant Xunlei is also getting serious about carving out a stake in the rapidly expanding blockchain sector.

Currently, Xunlei has applied for more than 100 blockchain patents, mainly in the core underlying technologies.

Lai Xin, chief engineer of Xunlei’s ThuderChain blockchain platform, said as the government has shown great resolve in embracing blockchain, a wide range of blockchain projects will emerge in 2020.

“In the long run, the key is to focus on the application of blockchain technologies,” Lai noted. “Currently, the difficulty lies in the willingness of some enterprises and institutions to apply blockchain as well as the talent shortage. More efforts are needed to cultivate talents with a big-picture thinking and cryptography professionals.”