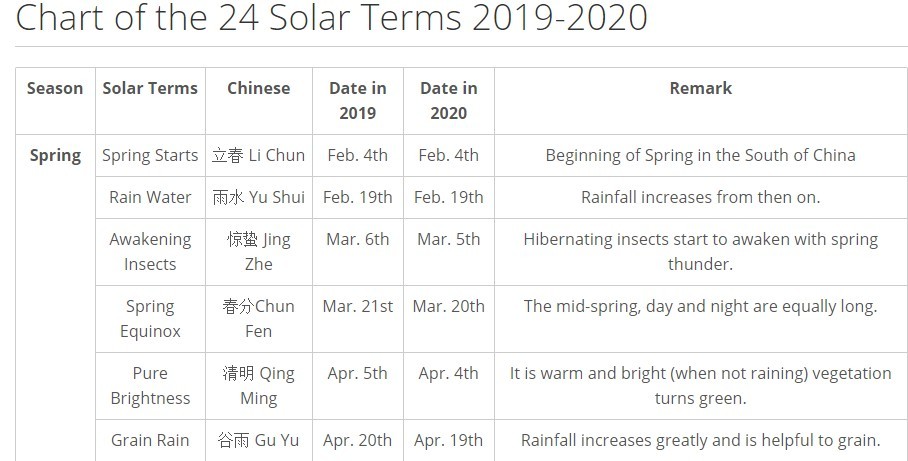 The 24 solar terms, based on the sun’s position in the zodiac, were created by farmers in ancient China to guide the agricultural affairs and farming activities. The 24 solar terms reflect the changes in climate, natural phenomena, agricultural production, and other aspects of human life, including clothing, food, housing, and transportation. The 24 solar terms play important roles and have greatly influenced people’s basic needs in life, and they still have an important function nowadays.

The terms consist of 12 pairs of major (sectional) and minor (middle) solar terms interlaced with each other., namelyThe 24 solar terms embody a complete circle of the sun and divide the circle into 24 segments, with each segment being about half a month long. In both the lunar and solar calendars, the Gregorian calendar date of each solar term is basically fixed, with minor differences of within one or two days.

1. Start of Spring – Welcoming Spring
The Start of Spring is usually around February 3rd, 4th or 5th during the period of Chinese New Year, also called Spring Festival, and marks the beginning of the spring season. On this day, people from the south of China traditionally welcome spring by setting off firecrackers and eating Spring Rolls (Chun Juan or Chun Bing in Chinese), crisply fried pastry rolls filled with shredded pork, mushrooms, cabbage and slightly crunchy bamboo shoots.
Click Chinese Food to learn more about Chinese Cuisine.

2. Pure Brightness – Remembering Ancestors
Pure Brightness is not only a solar term but also a traditional festival, Qingming Festival，also known as Tomb-Sweeping Day (清明节, Qīngmíng jié), and has been celebrated in China for centuries. The day is meant to commemorate and pay respect to a person’s ancestor. Qingming Festival can fall on any day between April 4th and April 5th. There are many classic ways Chinese people celebrate Qingming Festival:
• Show respect by visiting the graves of ancestors to sweep, tidy-up, and place fresh flowers on the graves, the most popular are chrysanthemums and lilies;
• Take a walk outside and welcome spring while enjoying the fresh April air and first signs of spring greenery;
• Eat Sweet Green Rice Balls are made from a mixture of glutinous rice flour and green plant juice then stuffed with sweetened bean paste;
• Kite-flying with colored lanterns tied to the end of the kite. It is said that if you let go of the kite, it will ward off sickness and bring good fortune!

3. Winter Solstice – Ancestor Worship – and Family Reunions
Winter Solstice marks the first official day of winter. The solstice happens at the same time every place on Earth. It’s when the sun on the sky’s dome reaches its farthest southward point for the year. At this solstice, the Northern Hemisphere has its shortest day and longest night of the year.

Winter Solstice Festival (冬至 Dōngzhì) also referred to as Winter Festival, is one of the most important festivals in China. It begins on December 21st, 22nd or 23rd. The date is dependent upon the tilt of the Earth. It’s winter in the Northern Hemisphere when the South Pole tilts toward the Sun. The origins of Winter Solstice can be traced back to the Yin and Yang Philosophy of Balance and Harmony in the cosmos.

Traditionally, Winter Festival is a time for friends and extended families to socialize and enjoy delicious foods. The kinds of foods eaten during festivals vary from region to region. Dumplings (饺子 jiǎozi /jyaoww-dzuh/), sometimes dipped in a small bowl with a mixture of vinegar and soy sauce before being eaten, are a popular and essential food of many people in Northern China. While in Southern China, it’s customary for families to make and eat tangyuan (汤圆 Tāngyuán/ tung-ywen) during Winter Festival.