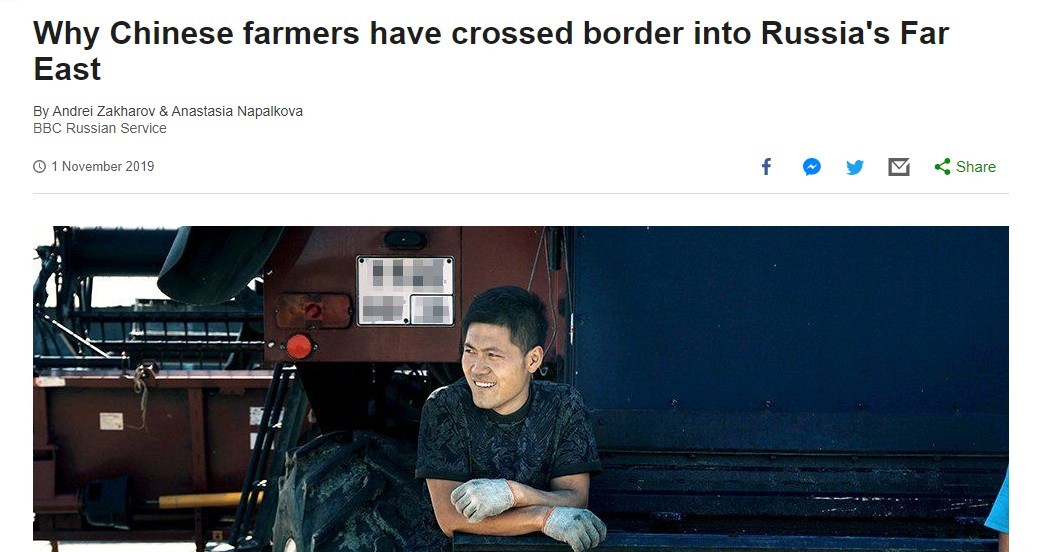 Personal Note: Russian farmers are smarter than Chinese? No Way! At least Chinese know how to make a living by working hard, no matter where in the world. Chinese are chinese and they will do whatever it takes to live and survive, in China or in border areas in Russia. You should be happy that someone is willing to work on the land…you Russians should thank the Chinese for doing so! Grow something to help the locals and the economy. Life must have a purpose, the Japanese would say! Peace, Steve, usa November 9, 2019   stephenehling@hotmail.com   blog – https://getting2knowyou-china.com

The farm in Maksimovka is surrounded by high metal fences. The Chinese migrants who work there only leave the site to go shopping. At the centre of this village in Russia’s Far East sits an old abandoned building – there is no lock on the door and inside, the floor is littered with papers dating back to the 1980s and 90s.

Here lie clues to why a farm that once provided work to some 400 Russians was unable to survive.

Like many of the collective farms in rural Russia, the Mayak farm collapsed with the old Soviet Union.

That is when the Chinese workers arrived, in five border regions, and Russians have not always been happy to welcome their new neighbours.
“Working in Russia is much the same as in China. You get up in the morning and go to work,” says Chom Vampen.

He is one of thousands of Chinese who have moved to this vast, under-populated part of Russia since the early 1990s.

Most seek work at Russian- or Chinese-owned farms or buy the lease on the land to develop their own agricultural enterprises.
 China’s Xi praises ‘best friend’ Putin
 China takes ‘panda diplomacy’ to Russia
As Russia’s relations with the West have deteriorated, President Vladimir Putin has welcomed China’s growing footprint here.
farm workers from Maksimovka

“We gave the shares to Fokin, thinking it would be better if the land belonged to the collective. But he gave it all to the Chinese and left, and we lost everything,” a local resident of Maksimovka village, Tatyana Ivanovna, said.
“No way,” says Mr Fokin. “There was nothing unusual about it.”

How Chinese companies took over

Chinese companies first appeared in Russia’s Far East in the early 2000s, but Beijing’s interest in the region increased after the global financial crisis of 2008.
“There was panic, [the Chinese] were looking at where to invest,” the head of a Chinese-owned farm told BBC Russian, preferring not to give his name.
Chinese investment was followed by an influx of Chinese migrants.
“We have little land and a lot of people,” said one Chinese farmer.

Based on data released by the state land register, BBC Russian calculated that Chinese citizens either owned or leased at least 350,000 hectares (3,500 sq km) of Far Eastern land in Russia. In 2018, around 2.2 million hectares of Russian land in the region was used for agricultural purposes.
The actual proportion could be higher, the BBC has learned.

Chinese farmers are, according to BBC research, represented in 40% of the Far East, most significantly in the Jewish autonomous region of Birobidzhan.
Regional governor Alexander Levintal said that in many cases land officially leased by Russians was in reality managed by Chinese nationals.

“Almost all the land that belonged to collectives was handed over to the Chinese,” said the head of the Jewish autonomous region’s peasant association, Alexander Larik.
Why relations are uneasy

Most of the farms run by Chinese migrants resemble fortresses. At Babstovo, a half-hour drive from the Chinese border, lies Friendship farm, which is surrounded by a high fence and a red flag.

But things are different in the village of Opitnoye Polye, where Xin Jie employs Russian as well as Chinese workers.

Like many Chinese here, he adopted a Russian name and is now known as Chinese Dima.
Chinese Dima moved to Russia in the 1990s and leased more than 2,500 hectares of land to develop a soya plantation. He is actively involved in the community, buying presents for nursery school children and sending his tractor to help clear the snow in remote villages in the winter.

Conflicts between Russians and Chinese are not uncommon. In 2015, three Russians entered a Chinese factory in the Far Eastern Amur region and threatened a Chinese guard with a stick, demanding he give them food.

A few days later, when they returned to steal a tractor engine, they were confronted by the same Chinese guard who this time carried an axe.

They were given prison sentences ranging from five to nine years.
Most Chinese cross the border for seasonal work, for sowing or harvesting, and then return home.

But many Russians are unhappy with the Chinese influx. More than one in three people said they viewed China’s Russia policy as expansion, according to a poll conducted in 2017 by the Russian Academy of Sciences.

Almost half said that China threatened Russia’s territorial integrity, while a third believed that it endangered their country’s economic development.

“They leave at seven in the morning and return after dark. I don’t see them and they don’t see me,” says Ivanovich of his Chinese neighbours in the village of Dimitrovo.
But some Russians have struck up friendships with the Chinese.

“They bring beer, we drink. I give them eggs and honey,” says Alexander.
Why Russian workers struggle to compete
Chinese farm workers in Russia’s Far East often have a better reputation than their Russian counterparts.

“The Chinese do not drink and they have nowhere to run; they come here for the season. Our citizens come to work for a week, plead for money and then go on a bender,” complained one Russian agricultural boss who declined to give his name.

A Chinese farmer who asked to stay anonymous complained about the drinking habits of Russian employees.

“All Russians drink. Today you pay them, tomorrow they do not show up. There are problems with discipline,” he said.
behind

Russia has a poor record of protecting workers’ rights, especially in the agriculture industry, which is generally low paid.
Not everyone here has a low opinion of local workers.

“What is the difference between Russian and Chinese workers? Russian workers are smarter than the Chinese,” says Chom Vampen.