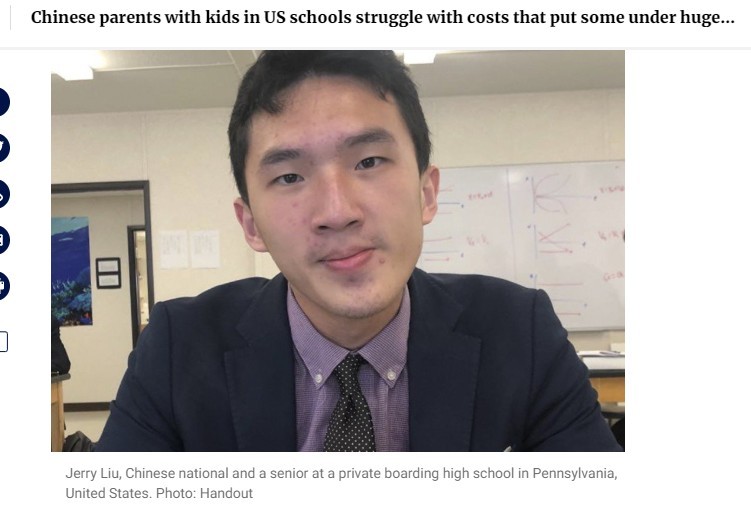 personal note: I spent 7 years as a visiting professor in mainland China. Education is one of the most lucratic business industry in China. Because they know how to exploit and take advantage of ignorant parents, dying to send their sons and daughters overseas to get a good education. They could have, if they have brains, study for much cheaper costs in mainland China. But most of these children are from one child family, and so they are pampered to death since birth! China has many kinds of schools, and they should try to qualify for these schools…anyway have money will spend! Peace, steve, usa, october 10, 2019   stephenehling@hotmail.com   blog – https://getting2knowyou-china.com

Chinese parents with kids in US schools struggle with costs that put some under huge financial strain
• Education and living costs in the US can eat up nearly 80pc of parents’ income; even a high-earning executive bridles at paying for 150km (93-mile) taxi rides
• Long before their children reach the US, many families will have spent tens of thousands of US dollars on consultants, test fees and preparatory tutoring

Like most Chinese students in the United States, Jerry Liu, a final-year student at a private boarding high school in the eastern state of Pennsylvania, is charged full tuition fees of US$59,050 a year. He also flies from New York to Beijing three times a year for holidays, which can cost more than US$1,300 per trip.
Few people, including Liu’s close friends, realise that paying his fees and related costs takes almost 80 per cent of his parents’ income.
“Before he left, we made it clear to him that his tuition was all that we could provide him with,” says Liu’s mother, Lian Qiu, who works as an office assistant; her husband works in advertising. “It’s like [the situation] in rural China – parents buy their child a house when he or she gets married, but that’s about all they can [afford to] give the child.”
In the 2017-18 academic year, China was the biggest source of overseas students in the US, with 363,341 studying there.
Although that number continues to rise
, growth slowed from 6.8 per cent in 2017 to 3.6 per cent in 2018, according to the Institute of International Education.
For Chinese families, overseas education costs are not limited to tuition fees – which, in the US, are 15 times the fees at top Chinese universities. It also means spending big sums on test tutors and college consultants.
A 2017 report by LendEDU, which surveyed more than 1,400 college graduates, shows that Asian students receive the most financial help from their parents for college fees.
Yet, contrary to the widespread belief that they are all wealthy, many Chinese parents are overwhelmed by the high cost of their children’s education. In 2018, the annual average wage in China was US$11,992, according to a report from databank Trading Economics .
[My son] always takes a cab rather than the train from his school near Philadelphia to New York [about 150km or 93 miles] and it costs several hundred dollars. We fight over this again and againLinghui Zhang, 40

A Chinese student’s journey through a US education
starts with standardised testing. An exam in the Test of English as a Foreign Language (TOEFL), required for international applicants, costs about US$217.
Students can take the test, and those for the SAT and SSAT college and school admission exams, as many times as they want, and Chinese students tend to sit them until they achieve the required score.
“I know people at my school who have taken TOEFL 10 times,” says Hongyi Yin, an 18-year-old from Beijing who is a first-year student at Case Western Reserve University in Cleveland, Ohio.
Although Yin studied at a high school affiliated to Renmin University of China, one of the country’s top secondary schools, he took the exam six times.
The cost of the SAT test has doubled or even tripled for Chinese families since it was withdrawn from the country and others in Asia in 2016 after a series of cheating scandals. Now, each year more than 40,000 mainland Chinese students fly to Hong Kong, Singapore or even Hawaii just to take the SAT.
Tingran Wang, 18, travelled to Hong Kong three times last year to take the test. He was one of 10,000 students sitting the exam in a hangar-sized hall; he flew home the following day with his parents.
“Wan ren keng is really not that bad,” says Wang, citing the nickname for the test site, which translates as “ditch of ten thousand people”.
“I just try to focus on my part and not get distracted by all kinds of situations that can happen when you are with this many students.”

Adding to the cost burden for Chinese parents is test prepping. In major cities such as Beijing or Shanghai, entire buildings are occupied by test prep centres, and students spend hours taking classes that target each section of the tests. Prep centres also offer different levels of tuition, according to students’ language proficiency and desired test score.
At the Sanli International Education Group, a popular test prep centre in Shanghai, courses range in price from US$1,454 to US$43,590, depending on the package, says CEO Haimu Sun, 35.
Each year, about 40,000 students are tutored at Sanlin, half of them hoping to get a good TOEFL or SAT score. Sanli also offers SAT trips to Hong Kong and the US, attended by about 1,000 students a year.
For Chinese parents, the American school and college application process can be unfamiliar and complicated, and hiring a personal consultant may be a necessity rather than an option.
Nini Suet, CEO of Shang International Education Group, says parents will pay a consultant as much as US$40,000 a year because they are “afraid to lose”.
“In the ’80s, the general perception in China was that all the bad kids go to school in the US,” Suet says. “But now you are seeing more top Chinese students aiming for the best institutions in the US. For parents, if their children are
giving up top schools in China for America
, and don’t get into an even better school there, they would feel as if their time and money were wasted. There’s so much for them to lose.”

Linghui Zhang, 40, paid US$174,360 to a consulting firm to manage her eldest son Calvin Chang’s application to board at a high school.
“The consultant told us our son needed to take all these classes and training, so we paid for them,” says Zhang, the chief operating officer of an energy resource company in Beijing.
She says her son was coached in interview techniques and visited Seoul for writing lessons. He was even accompanied by a consultant when he visited the school in Philadelphia, so the family could get more “insider information” from admission officers.
“In interview lessons we practised common questions that admission officers ask, so I would know exactly which stories to tell during actual interviews,” says Chang, 17, now in his final year at the boarding school. “My parents and I had never done the application process before, so we really trusted these consultants and their expertise.”
Although she has a high-powered job, Zhang feels the financial burden of boarding two of her four children in the US – each costs about US$65,000 a year.
“I feel exhausted,” she says. “It’s so hard to make money. Sometimes Calvin doesn’t understand the economic pressure I feel because we live in a nice house. But that’s different. The house is one of our assets. But kids think we have the spare money to buy them luxuries.”
“I only want to spend money on their education,” she says. “Sometimes Calvin gets a cab in New York City when it’s only a few blocks to walk, and he doesn’t understand why I get mad.
“He always takes a cab rather than the train from his school near Philadelphia to New York [about 150km or 93 miles] and it costs several hundred dollars. We fight over this again and again. I only want to spend money on his education and tutors, not his laziness.”
Ziheng Ma, 18, studies at a day school in San Diego, California. Besides the annual tuition fees of US$20,000, Ma’s parents pay his host family US$1,400 a month in boarding fees. Still, his accommodation has not been secure. He has moved four times, voluntarily or forced, since he arrived in the US – because of misconceptions about living habits.
“It’s really difficult to realise that the family that hosts me sees it as a business,” Ma says. “Sometimes it gets a little bit too much. Moving in and out is hard. But you just have to do it because there is no other way.”
This summer, he participated in a lab at Emory University that cost US$1,500, and a two-week biomedical programme at Yale University that cost US$6,500. “I’ve been told that these opportunities will make my academic background look better,” Ma says. “The programmes I am attending are related to biology, which will prepare me for my future major and even career.
“My parents are not wealthy but they seldom have conversations with me about money,” he says. “They would only let me know if I’m spending too much money on food abroad. But if I tell them I need to pay this tutor or pay for a programme, they wouldn’t think twice.”
Ma’s father is an architect and his mother a bank manager. He says his US school friends from similar socioeconomic backgrounds are considering public and community colleges. But Ma’s parents would never let him do that.
“They have worked really hard to allow me to have these privileges,” he says. “I feel like my parents would definitely tell me to go to the best college I can get into without considering tuition and scholarships, because applying for scholarships would limit my options. But then their lives would be really limited.”