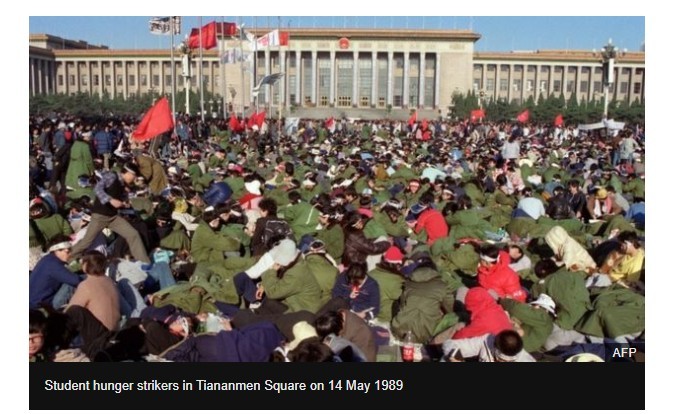 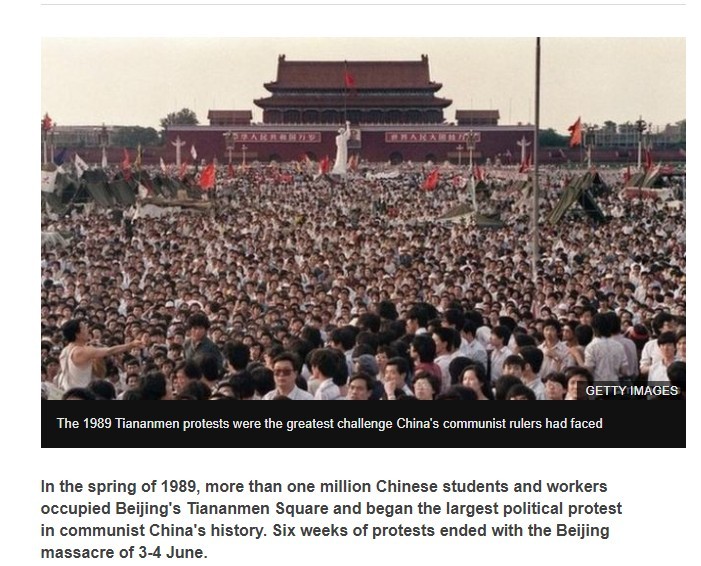 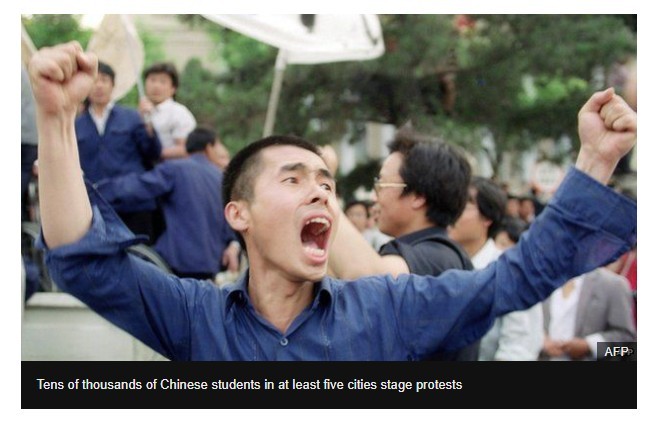 PERSONAL NOTE: Tiananmen protests happened in 1989…I went to China as a visiting professor in 2008! So I knew nothing about this. BBC NEWS were able to produce some of the photos of the crisis in China…peace, steve, usa, september 12

In the spring of 1989, more than one million Chinese students and workers occupied Beijing’s Tiananmen Square and began the largest political protest in communist China’s history. Six weeks of protests ended with the Beijing massacre of 3-4 June.
15 April: Hu Yaobang’s death
Former Communist Party chief Hu Yaobang, a leading reformist, dies of a heart attack aged 73. Mourners begin to gather in Beijing’s Tiananmen Square. They are expressing their sadness, but also their dissatisfaction with the pace of reform in China.
18-21 April: Demonstrations spread
Numbers in Beijing swell into thousands in the following days, and demonstrations spread to cities and universities nationwide.
Students, workers and officials shout slogans calling for greater freedom and democracy and an end to what they called dictatorship – others complain about inflation, salaries and housing.
editorial in the People’s Daily newspaper further fuels public anger
22 April: Hu’s memorial
Tens of thousands of students gather outside the Great Hall of the People in Tiananmen Square as Hu’s memorial service is held.
Their actions come in spite of an earlier warning by the city government that protesters risk severe punishment.
They deliver a petition of demands and insist on a meeting with Li Peng – China’s premier at the time – which is rejected.
26 April: Inflammatory editorial
The state-run newspaper, the People’s Daily, publishes an editorial entitled The Necessity for a Clear Stand Against Turmoil, accusing the protesters of rejecting the Communist Party.
The article closely mirrors views expressed by Deng Xiaoping, China’s unofficial leader. It further fuels public anger.
4 May: Numbers rise
Tens of thousands of Chinese students in at least five cities stage the biggest pro-democracy demonstrations of their kind since the communists came to power 40 years ago.
The action coincides with the 70th anniversary of the 4 May movement, an intellectual movement that wanted a stronger China.
But at a meeting with Asian bankers Zhao Ziyang, the official head of the Communist Party, says the protests will gradually subside.
13 May: Hunger strike
Ahead of a visit by Soviet leader Mikhail Gorbachev, hundreds of students begin an indefinite hunger strike in Tiananmen Square, pressing for political reforms.
They blame their extreme action on the government’s failure to respond to their requests for dialogue. The move draws broad public support.
15 May: Gorbachev’s state visit
Mikhail Gorbachev arrives in Beijing for the first Sino-Soviet summit in 30 years. His visit is intended to put a formal end to years of hostility between the two communist nations.
The protests force the authorities to cancel plans to welcome him in Tiananmen Square – a huge embarrassment for the government.
19 May: Zhao visits square
Zhao Ziyang visits students on Tiananmen Square, and makes a final, unsuccessful appeal for a compromise.
Zhao is accompanied by Li Peng, his hard-line rival, and Wen Jiabao, who will eventually become China’s premier in the future.
Zhao, who wanted China to introduce far-reaching political reforms, reportedly told the crowd: “We have come too late.” It was to be one of his last political acts.
20 May: Troops move in
Martial law is declared in several districts in Beijing and troops move towards the city centre.
A huge number of civilians block their convoys, setting up barricades on streets. The soldiers have been ordered not to fire on civilians.
24 May to 1 June: Heightened tensions
Over the next week, demonstrations continue with almost no visible security presence – there is a jubilant atmosphere in Tiananmen Square.
However, at government headquarters China’s leaders plan a new offensive to end the demonstrations and end the chaos in China’s capital.
2 June: Offensive approved
Communist Party elders approve the decision to put down the “counter-revolutionary riot” by force.
3 June: Night of bloodshed
Media captionKate Adie reports as Chinese troops fire on protesters
In the evening, thousands of PLA soldiers begin moving towards the centre of Beijing. People flood on to the streets to try to block them, setting up barricades along routes into Tiananmen Square.
As the army tries to break through in armoured personnel carriers, some troops open fire with guns loaded with live ammunition, killing and injuring many unarmed citizens.
4 June: Anger and shock
Tiananmen Square is cleared after a night of the worst bloodshed ever seen in Beijing under communist rule.
As the new day begins, the capital is in a state of shock. Thousands of angry and curious residents crowd up to lines of soldiers blocking the north-east entrance. The soldiers open fire again.
There is sporadic gunfire throughout the day.
The government hails the military intervention as a great victory. An editorial is published saying the army would severely and mercilessly punish “lawless people who plan riots and disturb social order”.
But Peking Radio’s English language service, in an act of defiance, says thousands of innocent civilians were killed. The government-run radio calls the act a gross violation of human rights and a barbarous suppression of the people.
Afterwards the authorities claim no-one was shot dead in the square itself. There is still debate about exactly how many people were killed. Some say a few hundred, others say a few thousand.
5 June: ‘Tank man’
The army now has complete control of Beijing. But the world witnesses a staggering act of defiance – the unarmed man blocking a column of tanks as they moved along Chang’an Avenue towards Tiananmen Square.
To this day, the fate of the man remains unknown.
, of a lone man in front of tanks, is now known around the world
9 June: Deng Xiaoping appears
China’s paramount leader Deng Xiaoping appears for the first time since the brutal crackdown.
In a speech to military officers he praises their efforts, and blames the turmoil on counter-revolutionaries who wanted nothing less than to overthrow communism.

•
The Chinese army crackdown on the 1989 Tiananmen Square protests killed at least 10,000 people, according to newly released UK documents.
The figure was given in a secret diplomatic cable from then British ambassador to China, Sir Alan Donald.
The original source was a friend of a member of China’s State Council, the envoy says.
Previous estimates of the deaths in the pro-democracy protests ranged from several hundred to more than 1,000.
China’s statement at the end of June 1989 said that 200 civilians and several dozen security personnel had died in Beijing following the suppression of “counter-revolutionary riots” on 4 June 1989.
who “was passing on information given him by a close friend who is currently a member of the State Council”.
The council is effectively China’s ruling cabinet and is chaired by the premier.
hunger strikers in Tiananmen Square on 14 May 1989
The cables are held at the UK National Archives in London and were declassified in October, when they were seen by the HK01 news site.
Sir Alan said the source had been reliable in the past “and was careful to separate fact from speculation and rumour”.
The envoy wrote: “Students understood they were given one hour to leave square but after five minutes APCs attacked.
“Students linked arms but were mown down including soldiers. APCs then ran over bodies time and time again to make ‘pie’ and remains collected by bulldozer. Remains incinerated and then hosed down drains.
“Four wounded girl students begged for their lives but were bayoneted.”
Sir Alan added that “some members of the State Council considered that civil war is imminent”.
The political protest had lasted seven weeks before the army was sent in and it was the largest such demonstration in Communist China’s history.
The killings remain highly sensitive in China.
China bans all activists’ commemorations and highly regulates online discussion of the incident, including censoring criticism. But it is marked annually by activists elsewhere in the world, particularly in Hong Kong and Taiwan