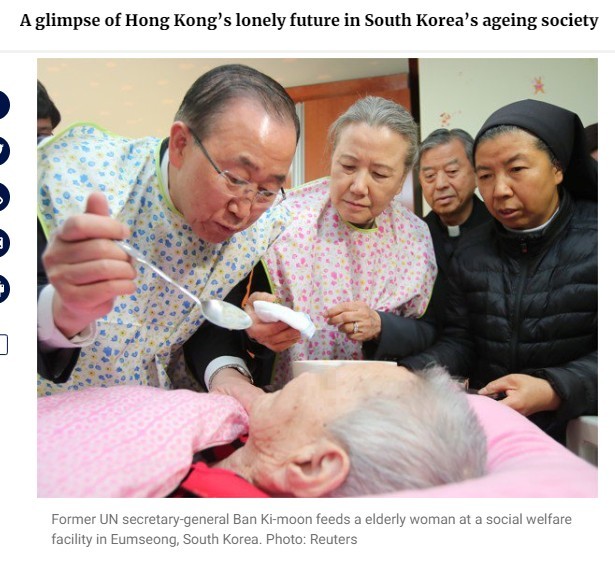 PERSONAL NOTE: I wrote the following:

Headlines of reports of what is happening in our society today!
…A glimpse of Hong Kong’s lonely future in South Korea’s ageing society
…Why are lonely Asians turning to robots for friendship?

…Can Hong Kong cope with its greying population?

…Thousands of people are dying home alone in Japan

…Elderly Hongkongers are way more likely to kill themselves than others. Why?
The headlines above reflect the tragedies of those growing old and alone or neglected by the society in Asia and SE Asia! What is happening to our virtue of filial piety? We Asians are brought up to love and respect and care for out parents, ancestors in our lives? When I was riding a bus in China, most would give me their seat and I would refuse it because I am used to standing in my classes as a college professor. But strangers would do it out of respect for us who are considered “old people” in their language. Flattered especially if you are in an Asian society. But more and more reports are telling a different story of today’s generations who care more for their pursuit of a good life, with less and less empathy for those outside their sphere of relationships or friendships! Young adults, who will grow old too, are busy chasing after their own dreams! No time for anyone. Sad but true! Many young adults are neglecting their graying or aging parents! Sad but true. Many Asians, unlike Americans, harbor and live by this attitude: I DO NOT WANT TO BOTHER YOU…and so many do not want to impose themselves on you…thus isolation and seclusion from the rest of the society…many choosing to die alone! So much so in Japan today, there is a special workers trained to clean up an apartment where someone has died alone…only discovered days, weeks and months later…the expert workers have learned to go through your living space (about documents, and how to clean up after removing your corpse, etc etc etc). Why? I thought Asians believe strongly in Karma…treat others (your aging parents) the way you want to be treated, hm! Did we forget this lesson in Life? I believe in karma…treat others the way you want or hope to be treated now or when you grow old!
Peace passion power, LY all…Stephen Ling, August 8, 2019

A glimpse of Hong Kong’s lonely future in South Korea’s ageing society
• Longer lives, fewer marriages and more divorces suggest seniors living alone will be a fixture of Asian societies for the foreseeable future
• South Korea, where seniors can die without anyone noticing for days, offers a bleak insight into what’s in store

Ko Myung-hee starts the engine of her SUV with bags full of fresh vegetables picked from her own garden and two ice-cold bottles of sikhye – a sweet rice drink. It’s 9am and the 52-year-old senior care administrator in South Korea’s northernmost province of Paju sets out to visit some of the area’s dokgeo-noin – senior citizens living alone. And she doesn’t like to arrive empty-handed.
There are more than 740,000 South Korean seniors living alone and a study conducted by the welfare ministry shows this population expands by 50,000 each year. In Paju there are about 14,000 seniors living alone but the Paju Senior Community Centre where Ko works must prioritise 1,100 most in need.
“For these seniors spending all their time alone in their house, all they want is to see or even just hear the voices of their children once in a while,” Ko says. “This is their hope and their dream.”

South Korea officially became an “aged society” in 2017 when people older than 65 came to account for more than 14 per cent of the population. In the same year, the number of people aged 15-64 fell by 116,000 – the first such decrease in the working-age population. In 2018, births hit an all-time low of 357,771.
South Korea is not alone in confronting the challenges of an ageing population – indeed, it offers a glimpse into problems faced by many of its Asian neighbours. According to the Organisation for Economic Co-operation and Development (OECD), more than 30 per cent of the populations in China, Japan and
South Korea
will be 65 or older by 2060. In Hong Kong, the situation may be even more severe, with the city’s government projecting the number of people aged 65 or over will reach 2.58 million by 2064, around 35.9 per cent of the population.

In each of these societies, longer lifespans are coinciding with
falling marriage rates
and growing divorce rates, suggesting seniors living alone will be a fixture in these places for the foreseeable future.
For her part, Ko used to live with her two college-aged sons but two years ago moved in with her 92-year-old mother.
“I didn’t want to send my mother to a nursing home, and I wanted my two sons to live in an environment where you learn how to take care of your seniors,” she says. “This is also my future, so I want to receive the same from my kids when I reach my mother’s age.”
LONELY LIFE, LONELY DEATH
Ko drives through rice paddies to Papyeong-myeon, a town with fewer than 4,000 people about 20km from the North Korean border.
“It takes about half an hour on a local bus for these seniors to go to the supermarket, as there are only convenience stores in this town,” she says.
Lee Doo-nam is 83 and never had children. Her sheet iron house off the town’s main road consists of a room with a coal stove and a narrow living space with cracked cement floors connecting her kitchen, bathroom and storage area. Lee’s only companion is her dog, who keeps trespassers away.
“I sometimes go crazy over the emptiness that I feel during nights,” she says.
Because of their isolation, seniors can pass away in their homes without anyone noticing for days, weeks or even longer. In 2018, a 74-year-old in Gwangju was found dead on his living room floor amid piles of rubbish. The firefighter who attended the scene estimated the man had died weeks earlier, judging from the condition of his corpse.
He had no children and had been excluded from the city community centre’s visitation roster after claiming he could walk unassisted.
Paju’s local government budgeted 2.2 billion won (US$1.9 million) to help fund visitation services. That money has enabled Ko’s community centre to provide seniors a further 300,000 won per month, as well as refrigerators, boxes of potatoes and fans.
Ko spends half an hour asking about Lee’s health and making small talk before the older woman goes to her vegetable garden, returning with lettuce and spring onions for Ko to take home.
Aside from travelling to buy groceries once a month, Lee rarely ventures beyond her property. She makes rice alcohol and beef stew to take to the town’s senior citizens’ centre, which is just behind her house.
“Even if I go to the centre, I leave early when I get into an argument with others,” Lee says.
Ko suggests that although Lee will not admit it, she gets lonely when she hears other seniors talking about their children or grandchildren.
I sometimes go crazy over the emptinessLee Doo-nam

NO PLANS FOR TOMORROW
Choi Jin-gu, 82, lives about 15 minutes away from Lee. The paper-covered walls and ceiling of his house are torn. Boxes and clothes are scattered throughout his living room and kitchen. He wears a wrinkled, stained T-shirt and his white beard appears to have been left untended for months. Choi’s wife died 30 years ago and he has been living alone since.
“I don’t know whether I will die tomorrow, so I don’t take care of my house or make any plans for tomorrow,” Choi says. “My kids don’t call me any more, and I don’t even know where my daughter lives in Seoul.”
After working as a field labourer from the age of 15, Choi bought land in Paju. However, he sold his land to support his children when they left home and married.
“I don’t blame my children for not coming to see me, as I don’t have any money now,” Choi says. “They are too busy sending their own kids to college.”
Ko, however, notices Choi’s irritation when she calls him.
“He picks up the phone hoping to hear the voice of one of his children but gets quite disappointed when he realises it’s just me,” she says.
Even though Choi has no contact with his children, the fact he has a family means he does not qualify for further benefits beyond the basic government pension. Several surgeries to his left leg have reduced his mobility and he cannot cook. A local community centre donates banchan – Korean side dishes – but mostly his meals consist of instant ramen noodles.
I don’t have a will to live any more. But I don’t want to put extra shame to my family’s nameChoi Jin-gu

In 2017, the suicide rate per 100,000 people was 48.8 for seniors in their 70s, rising to 70 for those in their 80s and older, according to the Korea Suicide Prevention Centre. The rate was just 21.3 for people aged 15-65. For Choi, the experience of having his son commit suicide has left him with a certain amount of resolve.
“This house used to be filled with family and laughter but the only companion I have these days are the female singers on TV,” he says. “I don’t have a will to live any more. But I don’t want to put extra shame to my family’s name by ending my life early.”
NEVER TOO LATE
While South Korea is far from alone in having a greying population, it has the highest rate of poverty among citizens aged 66-75 of all OECD nations – reaching 39 per cent in 2015, compared to 17 per cent in
Japan
.
South Korea also ranked 34th of 35 OECD member countries for social welfare spending, accounting for just 10.4 per cent of its GDP. The OECD average was 21 per cent – Mexico was lowest with 7.5 per cent while France led the way, spending 31.5 per cent of its GDP.
“It’s easy to rank the destitution of these seniors through numbers on paper,” Ko says. “But I think there is a need to start looking deeper into the lives of these individuals to see that many who need a helping hand are not getting it at the moment.”

Lee Ho-sun, a professor of welfare studies at Korea Soongshil Cyber University, suggests ageing parents should abandon the South Korean norm of giving everything to their children.
“Property and fortunes need to be something ageing adults continue investing in even at an old age,” she says, noting South Korea has taken its cues from Japan, where senior services have already been developed for many years. South Korea is only now following suit.
“Our country is trying to catch up with the rest of the world,” she says. “Instead of just nursing homes and senior community centres, we should invest in ways to assimilate seniors in the neighbourhoods [where] they are living.”

To this end, the Paju Senior Community Centre, where Ko works, offers various jobs – in day care, on the information desk or even in hospitality.
“I make about 310,000 Korean won per month working as a barista at the Paju Community Centre,” says Lee Suk-ja, 70. “I always wanted to open a cafe of my own since I was young, and, now, I get to live a part of my dream at the centre. I am always grateful for this opportunity that came quite late in my life.”