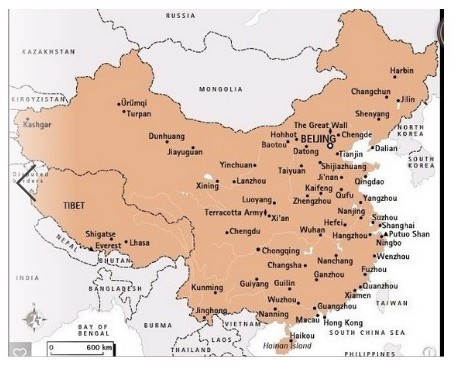 personal note: since 1978 till now, China has succeeded in bringing about 800 million of its people out of poverty…and China hopes to eradicate all poverty by 2010! China, with all its determination, might just succeed with this national goal by the central government…the China Dream is a dream for all Chinese, to live a happy, prosperous and harmonious life in modern China. Steve, peace, usa, july 31, 2019   stephenehling@hotmail.com    blog – https://getting2knowyou-chinia.com

The author is a senior vice editor with the National News Agency, Nepal and is currently participating in the China Asia Pacific Press Center 2019 program in Beijing.

“It does not matter whether the cat is black or white, as long as it catches mice,” Deng Xiaoping made this remark to make a departure for the socio-economic status-quo of China in 1970s. The crux of his statement, of course, was that any form of governance should guarantee economic progress and development for a prosperous society.
With the inception of the opening-up and reform policy in 1978, China has now made great leaps forward in many ways. During this period, an agrarian and poverty-stricken Chinese society emerged as the second largest economy in the world with more than 500 million strong middle class people, on the way to becoming the leader in technological advancement and innovation. Now, China’s leading role in 5G technology, Big Data and Virtual Reality (VR) is supplementary for global growth.
However, there are still many challenges within Chinese society, with poverty being a key problem in many rural areas. So, in order to alleviate poverty, China is aggressively trying to combat the issue and the Chinese model of poverty alleviation has become an example for the least developed and developing nations to shake off their poverty.
With President Xi Jinping taking office in 2013, China’s fight against poverty has set new records and officials are sincerely working in a planned manner to end poverty by 2020. Following the poverty eradication, China plans to step into the ‘moderately prosperous country’ category by 2020.
China lifted 740 million people in rural areas out of poverty between 1978 and 2017, or about 19 million people each year. The number of poor people in China fell to just 30 million at the end of 2017, which is relatively low in a country that houses almost 1.4 billion people. Still the number is high, needing serious government intervention.
As a foreigner, I had some opportunities to look at the programs implemented by different layers of government aimed at bringing those people out of poverty. I found the government officials and leaders of the Communist Party of China to be good agents in ensuring the implementation of the government announcements for poverty elimination.
In addition to mega infrastructure development, industrialization, and inflow of foreign investments, there are other macro interventions including cooperative interventions, commercialization of agriculture, and rural tourism that have yielded very good results to uplift people from abject poverty. So, both the horizontal and vertical approaches have been applied to uproot poverty and share the benefits to the needy communities.
A fascinating fact is that even members of a cooperate get their share increased according to cultural performance — an imitable tool to shake off poverty. At the same time, the local governments dole out optimum amounts of money for the protection of local heritages–both the natural and cultural–to bring in more visitors from domestic and international markets. One could easily observe a number of museums in different areas that depict the history, culture, economy, and other social domains of China. Likewise, the officials have put measures in place for accountability and assurance of fund utilization, meaning a ‘zero tolerance’ policy on corruption.
Interestingly, the rapid rise of middle-class people in China is also giving good momentum to the poverty alleviation drive since they are the ones to consume high-end goods, createjobs, spend more for sophisticated lifestyle, and keep the economy dynamic and robust.
For instance, I see many middle-class Chinese people thronging to theatres, museums, good shopping malls, driving private cars, exploring new tourism destinations and visiting restaurants for lunch and dinner.
Poverty is a major threat to socialism. Realizing this very fact, the government of China is putting its all-out efforts to meet its target by the end of 2020. Should there remain no extreme poverty, China shall enter into a new phase of its development and that shall be an exemplary model for other Asian and African developing countries. China’s neighboring countries, including Nepal, India, Pakistan, Bangladesh, Laos, Myanmar and some others too, can learn from Chinese experiences enforced in poverty alleviation.
The author is a senior vice editor with the National News Agency, Nepal and is currently participating in the China Asia Pacific Press Center 2019 program in Beijing.