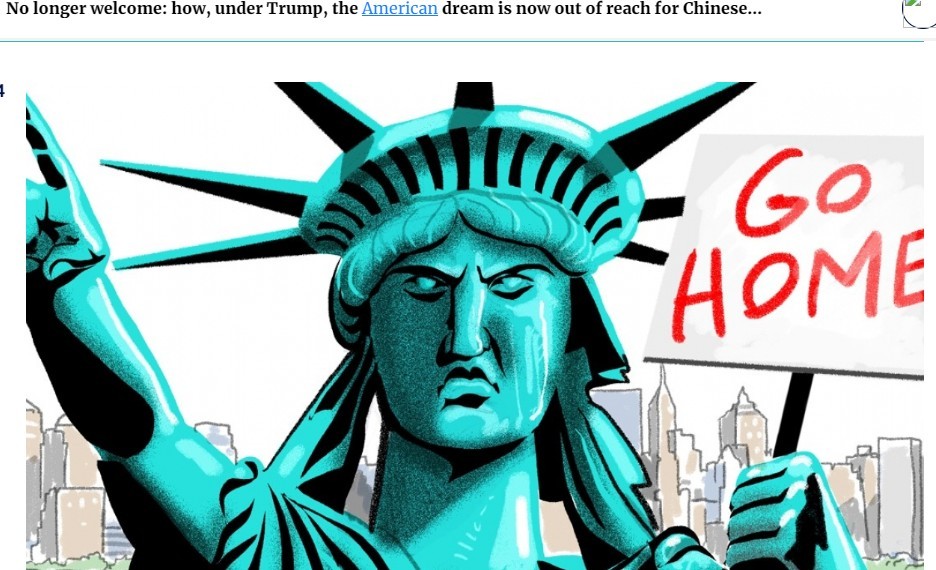 PERSONAL NOTE: I HAVE PROBLEM READING Mr Chi Wang’s opinion or thinking on why USA is not a good place for the Chinese, especially under the presidency of Donald Trump. The truth is, for me, I love my life in USA. I believe Mr Chi Wang should not speak on behalf of all Chinese who continue to come here…who is he? Maybe he is like many Chinese Americans I know in USA, the ones who never care to intermingle with the Americans, who live separate isolated lives from the rest of the Americans, who never feel the need to be fully integrated into the American society…I suspect Mr Chi Wang is one of those Chinese, who continue to feel alienated from the rest of the American society…I never felt that way, because from the start, I came to USA to live and work and enjoy my life like every normal American…I do not care to spend a lot of my time with Chinese people, because I am an American, and I want to live like an American. Probably I am the only Chinese living in my neighborhood, because I chose this way…so, Mr Chi Wang, stop speaking on behalf of people like me…I do not care for what you say, because you only create more problems for those Chinese who still want to come to USA for a better life…the door is still very open for those who believe America is a land of immigrants, a land of many opportunities! Steve, peace, usa, march 19, 2019  stephenehling@hotmail.com   blog – https://getting2knowyou-china.com

Opinion
Chi Wang
No longer welcome: how, under Trump, the American dream is now out of reach for Chinese immigrants
By Chi Wang, a former head of the Chinese section of the US Library of Congress and former university librarian at the Chinese University of Hong Kong, is president of the US-China Policy Foundation

Chi Wang says the undercurrent of hostility against the Chinese that has been growing in Trump’s America is now affecting American citizens of Chinese origin. Diversity, once a cherished value, is today seen in a different light
18 Oct, 2018

The US is a land of immigrants, and of diversity. It is a melting pot of different cultures and identities. Or, at least, that is what we are led to believe. That is the image of America that brings so many people from all over the world to its shores. This hope, this longing for acceptance and a piece of the American dream.
When I first came to the US, I was not one of those dreamers. I arrived in 1949 as a high school student, never intending to stay. But as the civil war in China ended and a new China formed, it began to look less and less like home. I began to embrace life in America and, ultimately, my new country was transformed into my home.
After living in the US for nearly 70 years, I cannot even consider thinking of anywhere else as home. And yet the US I’m living in today is not the US I remember. It is not the same country that welcomed me as a young man, the country I fell in love with and chose to make my home. The images of acceptance and hope that have compelled so many to come to the US are being replaced by “get out” signs.
To those in China still envisioning the open hands of the Statue of Liberty, I give you this warning – Chinese are no longer welcome here.
Of course, the US has never been as idyllic as the time-worn American slogans of inclusion might have you believe. As a Chinese-American, I have never felt like I fit in 100 per cent. I often find myself facing questions about where I’m from, what country I truly call home. I have lived in the US almost five times as many years as I ever did in China, and yet my American identity is not immediately recognised. The same is true for other Chinese-Americans whose families have lived in the US for generations.

Despite this, however, the curiosity and questions I faced over the years were never antagonistic. They were asked out of curiosity and ignorance – not as an excuse to tell me I do not belong. Today, however, the tone of these questions and the overall atmosphere in the US towards Chinese, Chinese-Americans and even other Asian-Americans has changed.
Now, our individual histories, backgrounds or nationality make no difference. If we look Chinese, we are inextricably linked to the People’s Republic of China. And, as the American leadership has made so painfully clear, we are now considered potential enemies.

Thanks to Donald Trump, it’s an awful time to be a Chinese abroad

For many in the US, our top leaders among them, the Chinese people are being seen as synonymous with the Chinese government. It is an odd sentiment coming from a country where the public, media and other government officials outwardly and loudly contradict and disagree with official policy.
While Americans enjoy the luxury of travelling to other countries and claiming a degree of distance from the actions of their government, they are not extending that same consideration to the Chinese. Even worse, they are lumping their fellow American citizens in with the foreign government as well.
In 2017, there were more than 350,000 Chinese students studying in the US, often paying full price for tuition. In 2016, 3 million Chinese tourists travelled to the US, spending US$33 billion. Despite the economic benefit, however, their presence in the US is often negatively received. Their behaviour is often mocked and their prevalence at tourist sites and college campuses is often treated like a plague rather than the financial boon it actually is.

And today, in President Donald Trump’s more hostile America, the environment is
getting worse
. For Chinese, the solution is simple – pick a university or travel destination in a more welcoming country.
For Chinese-Americans, however, our options are much more limited. We are being made to feel like strangers in our own home. For many, the US is the only place they or their parents have ever lived. For others, their countries of birth have changed so much since they left, or they themselves have changed, that those places are no longer recognisable. We are left homeless.
For me, I left before the People’s Republic of China was officially founded. In the years that followed, the changes China went through made it so that Beijing could no longer be considered my home. During the
Cultural Revolution
, my mother was killed by Red Guards and my family homes were confiscated, including the home that was intended to be a gift to me from my mother when I returned to China with my wife. Now, I have nothing to go back to.

Taiwan and Hong Kong have more freedoms and are great places to visit, but they are likewise not home. I would be an outsider, trying to start anew. And that is something I am definitely too old to do.
Hate and prejudice have seeped into the mainstream. After all, when our president acts that way, why should others show restraint?

So, like the 5 million other Chinese-Americans, I am trying to reconcile my own American identity with the hostile environment my country has now become. How do we remain patriotic when our president speaks of us with hate and scorn? How do we stay proud when our fellow Americans accuse us of spying for a country we’ve never been a citizen of?
I hope the situation in the US will improve, that calmer voices will prevail and American diversity will once more be embraced. However, I am not sure that a new president would even be enough to change things. Hate and prejudice have now seeped into the mainstream. After all, when our president acts that way, why should others show restraint? I can’t help but fear that damage has already been done and will continue to resonate for years to come.
I still love America. I am glad I moved here all those years ago and am grateful for the life I’ve made here. But if I were a 17-year-old Chinese student living in the US today, I am not sure I would have stayed. I have no regrets about my own life, but I don’t think my American dream is as accessible for Chinese immigrants any more.
Chi Wang, a former head of the Chinese section of the US Library of Congress and former university librarian at the Chinese University of Hong Kong, is president of the US-China Policy Foundation