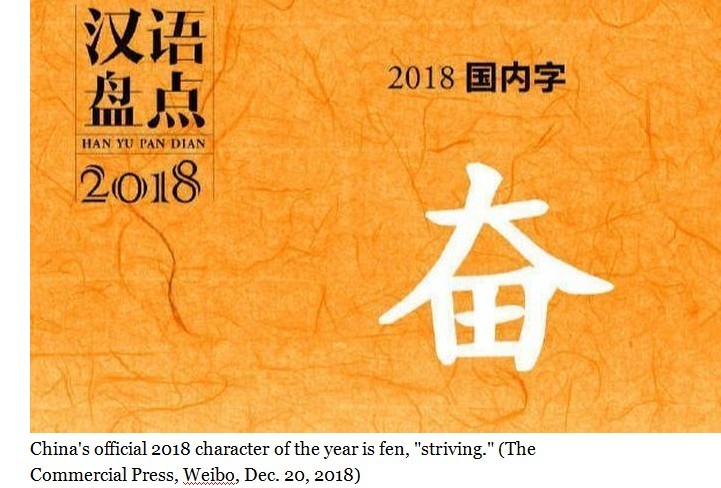 PERSONAL NOTE: IT SEEMS China is also competing with the rest of the world in creating new words to describe the human condition, existing in some parts of modern China…Dirt port and ugly, especially to describe who are going nowhere in life in contemporary…left behind in the new China…widening gape between the haves and haves-not! Not only true in China but also in my country, USA! But China is moving at a tremendous speed of progress, especially reflecting what has taken place in USA this past few decades where the rich are getting richer, and poor are going nowhere! steve, usa, december 27, 2018  stephenehling@hotmail.com

Dirt-poor and ugly — the proud new mantra of those left behind in the new China
By ALICE SU
DEC 26, 2018 LATIMES

Chinese netizens created a composite character from the characters for “poor,” “ugly,” and “dirt” that went viral on the social media platform Weibo. The first image shows the composite character. The second image shows three definitions for it. (Weibo)
The latest craze in Chinese slang is a combination of 穷 and 丑 with 土 tucked neatly inside.
Pronounced “qiou,” the new character can’t be produced on a keyboard. But its image, which appeared early this month on Weibo, the Chinese equivalent of Twitter, has been viewed tens of millions of times.
Its popularity has nothing to do with China’s reputation for ambition and optimism or the Communist Party’s attempts to project an image of strength and power. Quite the opposite.
The three components mean poor, ugly and dirt, though the dirt character is also used colloquially as outdated, unfashionable or tacky.
Put them together and — according to one highly shared post — you get an adjective with three possible definitions: 1. so poor you’re eating dirt ; 2. not only ugly, but also so poor you eat dirt; 3. poor, ugly and dirt-tacky.
Young netizens who feel left behind in China’s new economy have claimed the character as an ironically proud expression of loser-hood.
Many Weibo users spread the same joke about qiou: It should be a synonym for wo— or “me.”
Fans of the new character aren’t in dire poverty. After all, they have access to the internet and time to play on social media. But they live on the wrong side of China’s widening income gap, a place where finding a job, buying a house and getting married can feel impossible.
Like frustrated millennials the world over, they find solace in laughing at themselves on the internet.
“My life was qiou to the point of no return,” a computer programmer recently posted in an online forum, describing a series of calamities that included an acne outbreak that turned him into a “pox-faced Buddha,” losing part of a tooth in a fall down the stairs and shivering in the streets of Beijing because he had to use his jacket to cover a fresh tear in his pants.
The forum posed the question: “What moment truly made you feel qiou in 2018?”
Another respondent, Wang Yaling, described leaving his hometown in search of a better job, surviving on plain buns and water in order to pay his rent, then stuffing himself when his new boss took some employees out to eat.
“I thought, I’m a human being, why don’t I live like one? I thought of my family. I thought of my future. My heart ached… and then I fell asleep,” he wrote. “The next morning I woke up and started working like crazy to get promoted and make more money — and now I’m still just a low-level employee.”
Janice Chong, who works in finance in the city of Shenzhen, wrote that her qioumoment was investing in several financial technology companies only to see them crash.
“I lost my investments and I’m sinking into a fog of self-doubt,” she said.
For some, even the new character falls short in describing the sense of being excluded from China’s economic boom. One Weibo user, whose profile says she is 25 and from the city of Xian, wrote: “Feels like I can’t even afford to eat dirt — I’m living off air pollution.”
It’s a side of China that doesn’t get much press.
The country’s ascent to economic superpower has been accompanied by income inequality that the International Monetary Fund says is more extreme and growing far more rapidly than that in the United States. The top 1% of Chinese households own more than a third of the country’s wealth, while the bottom quarter has less than 2%, according to a report from Peking University.
Inequality is exacerbated by China’s household registration system, in which citizens have access to schools and other public services only in the places they were born.
Hundreds of millions of people have migrated from the countryside to major cities, but they don’t get equal access to schools, home loans or jobs.
With more than 8 million people graduating from universities each year, and hundreds of thousands more returning to China with foreign degrees, competition for jobs is cutthroat.
All this means a growing divide between the urban elite and the rural poor. The haves and the have-nots. The fantastically rich and the qiou.

“Feels like I can’t even afford to eat dirt — I’m living off air pollution,” a user posted on Weibo. (Weibo, Dec. 4, 2018)
In a language with about 50,000 characters — each with its own meaning and the power to join with other characters to create words and phrases — the creation of new characters is rare.
No one has stepped forth as the inventor of qiou, and the speed of Chinese social media — things get copied and pasted by millions, then disappear overnight — makes it hard to identify who posted it first.
But it wouldn’t be the first time that self-deprecating slang has gone viral in China.
One of the most popular terms on Chinese social media is diaosi, which literally means penis hair but has become shorthand for anybody who feels they’ve failed at work, romance or life in general.
In 2014, Peking University surveyed 213,795 people ages 21 to 30 across 50 cities and found that 62% of them considered themselves diaosi.
The term’s popularity even inspired an academic paper, published in 2016 with the title: “Why Do Chinese Young People Call Themselves ‘Losers’?”
The author, Xinyu Huang, a graduate student in the department of communication, culture and technology at Georgetown University, concluded that being diaosi is part of a “counter-hegemony identity” born out of resentment against the elite as the wealth divide expands.
AM
“Embedded in China’s culture and social structure, diaosi is a symbol representing an antagonism against the wealthy and powerful people at the top of China’s society and against the social rules created by them,” Huang wrote.
The targets for mockery include thegaofushuai, slang for “tall, rich, handsome,” the baifumei, or “fair-skinned, rich, beautiful,” and the erdai, or “second-generation,” whose parents are wealthy and well-connected.
Karita Kan, a professor in applied social sciences at Hong Kong Polytechnic University, wrote that embracing the term diaosi is a way of sticking it to the man.
“It displays a playful irreverence for authority and established institutions through a non-violent but uncooperative discourse,” she wrote in the journal China Perspectives in 2013.
The same can be said for the new character, whose creator appears to have been trolling the government and its penchant for self-promotion.
Qiou began appearing on Chinese social media a few days after the Commercial Press publishing house announced the finalists for China’s 2018 word of the year.
The contest began in 2003 and is run by the Communist Party’s newspaper, People’s Daily, and several other institutions approved by the government.
The nominees, which include phrases as well as words, often play off Communist Party slogans about a bright Chinese future.
This year’s included “stability,” “international import expo,” “change,” and — in a nod to the party’s most visible propaganda campaign of the year — “reform and opening for forty years.”
China’s official 2018 character of the year is fen, “striving.” (The Commercial Press, Weibo, Dec. 20, 2018)
The winner, announced Thursday, was fen, or “striving.”
“Fen is for the people’s brave striving toward a beautiful life, even more for the Communist Party’s selfless striving toward lofty ideals and beliefs, for difficult striving and courageous, forward striving toward realizing the Chinese people’s great China Dream of revival,” the Commercial Press announcement said. “… In the magnificent picture of the new era, striving itself is a form of happiness.”
Qiou never even had a chance.