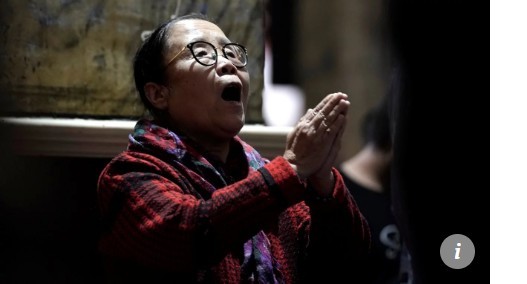 Personal Note: I spent 7 years as a visiting professor in China and I had the privilege of visiting many towns with my students. I was surprised that many churches have been reopened for worship. Many churches have a new paint and presence in many communities I visited. And so the reports I am sharing with you are telling a different kind of stories…why the Chinese government have decided to go after certain “churches” in China? I could only think of those churches which have not registered with the Chinese government. I understand when Chairman Mao took over China in 1949, many missionaries had to leave China and some went to jail in China. Communism has no room for Christianity. I understand that. After Mao’s death in 1976, China started a new page, so to speak. And many churches returned to life…the government does not allow any church to be linked with the west…and so all churches operating in China today have to be autonomous…self-supporting without ties to the west. I understand that. So I believe the government are closing those churches, house or underground, that have not registered with the government, therefore their activities are considered illegal and against the Chinese government. I know the Pope in Italy is still negotiating with China about the role of  the Pope in the catholic churches in China. The discussion continues. But China only allows churches in China to be autonomous. I believe all churches in China should obey the government and be registered legally to function in China today. I believe the Chinese constitution allows all religious practices in China. steve, usa, december 11, 2018 stephenehling@hotmail    blog – https://getting2knowyou-china.com    weChat 1962816801

A prominent underground church in southwestern China was raided by police on Monday afternoon, hours before a planned evening service to commemorate the Tiananmen Square anniversary.
The bloody 1989 crackdown on pro-democracy protesters is a taboo for the ruling Communist Party and any discussion of the issue is strictly censored in Mainland China.
Attempts at a public commemoration are often punished by the mainland authorities with harassment, detention or imprisonment and Hong Kong remains the only place in China where large-scale events are allowed.
The Early Rain Covenant Church in Chengdu, the capital of Sichuan province, had planned a two-hour prayer session at 7.30pm to mourn those killed in Beijing 29 years ago.
But soon after 3pm dozens of uniformed and plain-clothes police officers stormed the church, taking away its pastor Wang Yi, along with his wife and more than a dozen preachers and worshippers, members of the church told the South China Morning Post.
The couple were released sometime after midnight, a member of the church said.
Since 2009, the church has designated the period between May 12 and June 4 its “prayer month” to remember the natural and man-made disasters that have hit China on those two dates.
May 12 was the anniversary of the devastating earthquake that struck Sichuan in 2008 while June 4 was the anniversary of the Tiananmen crackdown.
Previously the church has only been able to hold a June 4 service when the date fell on a Sunday, and in other years members have gathered in small groups for prayers.
Portraits of persistence: the Hongkongers refusing to let June 4 fade
However, one church member said this was the first time the church had been raided on the day of the anniversary.
Wang, who like other politically sensitive figures is closely watched by police on June 4, has always been prevented from leading services on that date and was usually confined to hishome.
The church remained shut on Monday evening, with large numbers of police officers – both uniformed and plain-clothed – still outside keeping watch at 8pm.
The reason given by the police was that the church was not approved or registered, and thus has no right to organise religious activities.
Members of the congregation said the officers in question were from a local station in the Qingyang district.
The police declined to be interviewed, saying their investigations were not open to the media.
29 years on, June 4 vigil continues to showcase Hong Kong’s freedoms
A notice issued by the Qingyang ethnic and religious affairs office was put up on the church gate, saying it had violated the newly revised Regulations on Religious Affairs.
Officially, only state-approved religious organisations are allowed to operate in China, but the growing Christian community ensures that numerous “house churches” thrive, despite close monitoring and periodic harassment from the authorities.
The Early Rain Covenant Church, founded in 2005 by Wang – an outspoken former civil rights lawyer – is one of the most prominent house churches in China.
Release the Tiananmen Square death toll, United States urges China
It was also raided last month, the night before a planned service to mark the 10th anniversary of the Sichuan earthquake – the deadliest in China for three decades.
On that occasion Wang was taken away by the police and released on Saturday night after about 24 hours in detention.
Speaking after Monday’sraid, one member of the church, who declined to be named, said: “It is not that we want to discuss politics. It is because of our faith that we cannot allow ourselves to dodge such a huge crime.”

100 Christians snatched in overnight raids on underground Chinese church
• Worshippers were taken from their homes and off the streets in coordinated crackdown across Chengdu in Sichuan province
• A pastor was among those arrested
10 December, 2018 Mimi Lau, SCMP (33894share)

About 100 worshippers at an unofficial church in southwestern China were snatched from their homes or from the streets in coordinated raids which began on Sunday evening.
Chinese authorities targeted members of the Early Rain Covenant Church across various districts of Chengdu, the provincial capital of Sichuan, in what appeared to be an effort to close down one of the country’s most prominent Protestant house churches.
Members’ personal accounts and cell group discussions on social media channels were blocked at around 9pm on Sunday while the church’s telephone line was also cut. The homes of the church’s leaders, including pastor Wang Yi, were among those raided.
Arabic school to shut as pressure on China’s Muslims grows
Zhang Guoqing, assistant deacon of the Early Rain Covenant Church, was among two church members who were released on Monday morning after his arrest by Chengdu police in the Sunday night raids.
He is now being watched around the clock by “security personnel” in his home.

Zhang said he headed to Wang’s home at around 7pm on Sunday after hearing about the raids but the pastor and his wife Jiang Rong were nowhere to be found.
“His home was ransacked. It was a mess,” Zhang said.
“The police said our church is an illegal organisation and we cannot attend any more gatherings from now on.”
Chinese bishop ‘missing’ despite deal between Beijing and Vatican
The Early Rain Covenant Church is one of China’s few unofficial house churches – Christian assemblies that operate without state sanction – and this is not the first time Wang and other members of the church have been detained.
While most of China’s Protestant house churches operate underground to avoid attracting official attention and control, the Early Rain congregation openly practises its faith, postingsermonsonline and evangelising on the streets.
Many house churches have been closed this year in China’s harshest religious suppression in decades.
Bob Fu of China Aid, a US-based Christian non-profit organisation, said the crackdown represented a major escalation of religious persecution in China.
According to Fu, there were more than 10,000 cases of detention of Christians this year, compared with just over 3,000 cases for the whole of last year. In September, Beijing police closed the Zion Church, one of the largest Protestant churches in China with more than 1,500 regular church-goers.
In February the Religious Affairs Regulation was amended to give grass-roots officials more power to act against churches and impose tougher penalties for “unauthorised religious gatherings”.
China bans one of Beijing’s biggest underground churches
In Henan and Zhejiang provinces, two of the hardest-hit areas in the religious clampdown, churches have been shut down or even demolished, and their members told to denounce their faith.
The Early Rain church has about 500 followers but their weekly gatherings spread across 12 meetingpointsaround Chengdu, attracting more than 800 church-goers on a weekly basis, according to the church’s elders. It also has about 100 seminary students and a primary school catering to about 40 children.

The South China Morning Post has learned that a number of elders are still in hiding while many church members were tracked down by police overnight asking them to sign a letter pledging they would not attend further gatherings.
“This round of crackdown is unusual as it seems that the authorities want toclosethe church down for good. Our social media channel accounts such as WeChat were not closed in previous rounds and they have taken a large number of our members into custody this time. The scale was unprecedented,” said Li Yingqiang, one of the church elders.
China to ban foreigners from preaching religion online
Despite the massive purge, Li said gatherings would continue.
“Even if we are down to our last five, worship and gatherings will still go on because our faith is real,” Li said.
“Persecution is a price worth paying for the Lord. We would rather live through it than to hide our faith and we hope more Chinese churches will speak up and stand with us.”