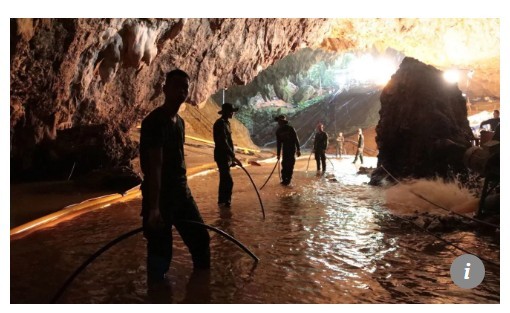 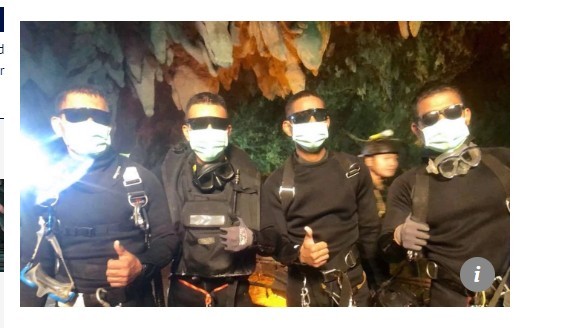 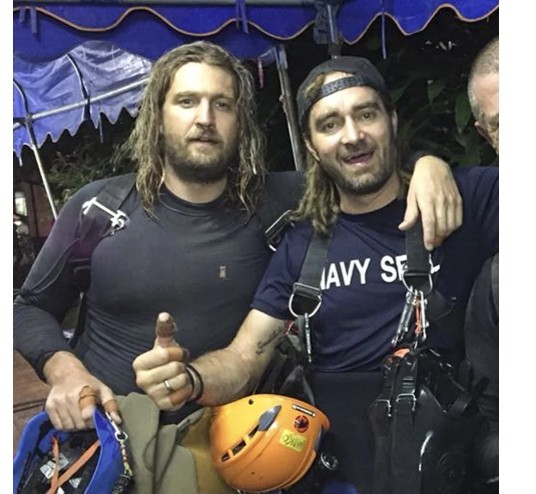 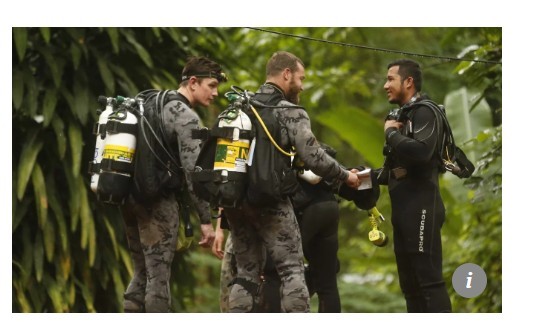 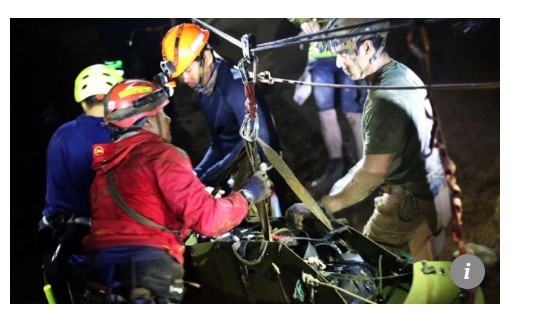 PERSONAL NOTE: The whole world was watching the events in Thailand, like watching a horror movie, on the edge, not knowing if the boys, lost inside a deep cave in Thailand, would make it out alive..it was a very difficult task for all concerned…especially the experienced divers from all over the world, who were there to rescue the Impossible Mission…Matt Gutman works for ABC NEWS…this is the American ABC, not the Australian ABC…I see all the time when I watch the ABC evening news in America. And he wrote this incredible story based on his personal experiences covering the event for the American TV network…we have three famous traditional tv news networks: ABC, NBC and CBS…they are all great…anyway if you could find the book where you live, get a copy of it and relive the days of horror when all of us were not sure if the divers could make it to bring the boys out of the cave alive…STEVE, usa, december 8, 2018   stephenehling@hotmail.com    blog – https://getting2knowyou-china.com

First book on Thai cave rescues, The Boys in the Cave, is a gripping account of ‘mission impossible’
• Chief national correspondent for ABC News Matt Gutman dissects the extraordinary rescue mission to save the trapped soccer team
• He was on the ground covering the international effort to rescue the boys from rising floodwaters
08 December, 2018 Gary Jones, scmp

The Boys in the Cave: Deep Inside the Impossible Rescue in Thailand, by Matt Gutman, pub. HarperCollins
Millions of people worldwide were transfixed by the real-world Mission: Impossible playing out in the north of Thailand for two fraught weeks in June and July this year.
Just outside the town of Mae Sai, in the northern Chiang Rai province, 12 boys from the Wild Boars junior soccer team had been taken by their assistant coach to explore the nearby Tham Luang Nang Non cave.
When the cave was unexpectedly flooded, the boys, aged between 11 and 16, and Ekapol “Coach Ek” Jantawong, 24, were trapped deep inside, with no means of communication with the outside world. Only a scooter and 11 bicycles they had left in the bushes outside the cave offered a clue to their whereabouts.
The Wild Boars’ head coach, Naparat “Coach Nok” Guntawong, and overwrought parents sped to the cave, calling out the boys’ names, hoping for some sign of life. “The only answer came from the cave itself, the echoes bouncing the names back at them,” journalist Matt Gutman writes in his new book, The Boys in the Cave: Deep Inside the Impossible Rescue in Thailand.
Gutman, chief national correspondent for American broadcaster ABCNews, covered the rescue on the ground. His page-turning book was researched and delivered at breakneck speed, with Gutman interviewing dozens of eyewitnesses, rescuers and experts. The book is likely just the first of many written accounts to dissect how the thrilling saga unfolded – and is sure to be made into a film.
It would be hard, in fact, to imagine a tale so suited for the silver screen or television. The rescue attempt draws in a motley cast of characters from across the planet – each with their own idiosyncrasies and motivations – that even the most resourceful screenwriter would struggle to invent.
As sleep-deprived brains are racked to bring the boys home, friendships and enemies are made, cultural misunderstandings and national rivalries multiply and fester, and there are many instances of selfless heroism and sparring egos.
The final rescue plan is so mind-bogglingly audacious that it takes your breath away.
The prologue to Gutman’s true-life taledetailsfirst contact with the boys and their coach, who are cornered by raging floodwaters 4km from the cave’s entrance. For nine days they have been in total darkness, without food or warm clothing, some barefoot, staying alive by licking condensation from the limestone walls, huddling together for warmth and meditating.
Jubilation as all 12 boys and coach are rescued from Thai cave
Coach Ek, a stateless member of the “Tai Lue minority that roams the mountains between Thailand, Myanmar and Laos”, Gutman writes, had previously studied in a monastery. “Before big games, the former monk would lead them in the Buddhist meditation technique of vipassana, which focuses on mindfulness breathing and understanding of the ever-changing and impermanent nature of reality.”
“It had started out as a pretty typical Saturday in Thailand’s northernmost town, Mae Sai, snug against the Myanmar border”, Gutman writes. That typical day involved friends and laughter, soccer practice, snacking on dried squid, and cycling to the cave – its chambers and passageways spreading over 10km beneath Doi Nang Non mountain.
Last boy was out – but hero cave divers were still in deep water
The monstrous, remorseless, shape-shifting villain of the story is water. Signs at the entrance to the cave say that the labyrinthine complex is only dangerous during monsoon season, which was still more than a week away when the team entered, but Thailand had been pelted with significantly more rain than usual.
Hampered by rising floodwaters and strong currents in submerged passages, disorienting darkness and razor-sharp rocks, the race began to find the boys. Hundreds of volunteers, military specialists and corporate experts converge from across Thailand and the planet to offer help. And all the while, the clock is ticking, the monsoon building, the waters rising.
Within days, Gutman writes, “the cave complex’s parking lot had turned into an auxiliary camp that looked like Woodstock, with a parade of mud-washed people passing full kitchens whipping up hundreds of meals a day, a medic’s tent, lights, and barricades. The Wi-fi routers and extra cell phone tower provided some of the fastest and most reliable connectivity in Thailand.”

Some characters played more leading roles in the rescue than others, and there is something wonderfully cinematic (think The Seven Samurai; Ocean’s Eleven; The Guns of Navarone) about the gradual assembling of the rescue team and its supporting cast.
Fast on the scene are a team of young, super-fit Thai Navy Seals, unquestionably brave but perhaps poorly equipped for the unique demands of cave diving. Staying nearby is Vernon Unsworth, a 63-year-old Briton who lives for part of each year in Mae Sai and loves exploring the local caves.
Unsworth’s passion for being underground, he tells Gutman, means that locals “thought I was crazy … They called me Crazy Caveman”.

Central to the British rescue contingent are gruff, no-nonsense, middle-aged Rick Stanton and John Volanthen. They are arguably among the best cave-rescue divers in the world and who – to the chagrin of the Thai Seals and some other divers – locate the lost boys, filming the original GoPro footage of their subterranean encounter that immediately went viral.
Then there is a swashbuckling bunch of diving instructors known – inaccurately, considering that one, Erik Brown, was from Canada – as “the Euro-Divers”. These include Danes Claus Rasmussen and Ivan Karadzic, dreadlocked Mikko Paasi of Finland and Belgian Ben Reymenants.
While most get on with the Britons, disgruntled Reymenants, who was active in laying underwater guidelines deep into the cave, is reported by Gutman as complaining of Stanton and Volanthen: “We laid the red carpet for them, and they laid the British flag.”

In attempting to reach the Wild Boars, Gutman, in fact, suggests that some would-be rescuers occasionally suffered from “glory fever” that “quickly became a fatal organisational flaw, preventing and actively discouraging information sharing that in turn wasted possibly tens of thousands of work hours”.
Eventually, a lid was put on this self-defeating aspect of human nature by the deep-pocketed hotshots of the United States Air Force 353rd Special Operations Group, who ultimately provide the discipline and the meticulous military planning to pull a bold, now-or-never plan together.
Central to that plan are Australian anaesthesiologist Richard “Harry” Harris and his compatriot, veterinarian Dr Craig Challen, both of whom just happen to be world-class cave divers.

Their involvement is crucial to the decision – with the boys being so frail, perhaps prone to panic and all poor swimmers – to sedate them with a cocktail of drugs (the heavy hitter being ketamine, applied by injection into the thigh) during the rescue operation. The boys are drugged, equipped with ill-fitting breathing apparatuses, trussed up like mummies, and each tethered to his individual saviour to be dragged back while comatose.
The chance of success is slim – it is estimated that the fatality rate might reach 80 per cent.
The final extraction employs an international team of divers, each “with the chops to haul inert 70 to 150-pound sacks of human beings through fifteen hundred yards of underwater terror”.

The big problem is that each journey back to daylight will take two to three hours, and each hit of ketamine will wear off in less than 30 minutes. There are pulse-pounding, nail-biting, almost unbelievable moments of high drama: one boy stops breathing a number of times while sedated; another nearly dies of hypothermia when his rescuer becomes lost; and one begins to wake up underwater.
The speed with which Gutman pulled his book together means there is a stray typo or two in the text, and very occasionally, direct quotes are not clearly attributed. On the larger whole, however, the writer has raced out a satisfying, impressive piece of journalism that is jam-packed with descriptive colour, intriguing characters and a thrilling climax. (To Gutman’s credit, he also downplays the Elon Musk sideshow, and the tech entrepreneur’s undignified spat with Unsworth.)
Come the final page, and despite the death of retired Thai Seal Saman Gunan, who perished while laying guidelines in a flooded passage, the reader of The Boys in the Cave will be forgiven for repeating the rescue camp’s battle cry of “Hooyah!”, and joyfully punching the air