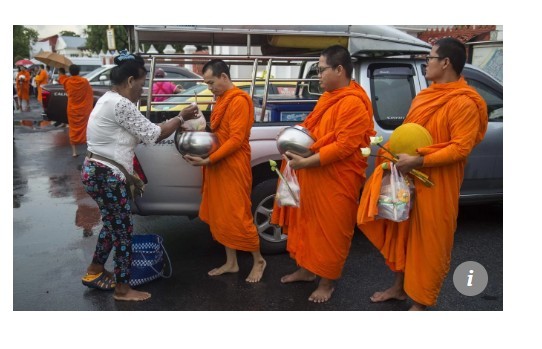 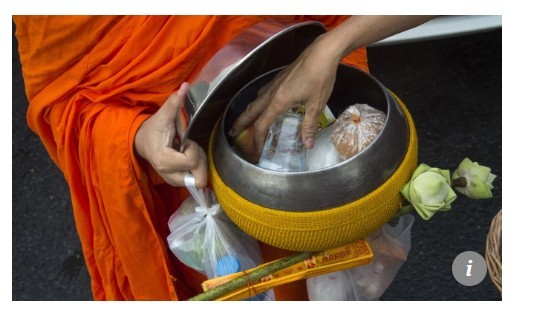 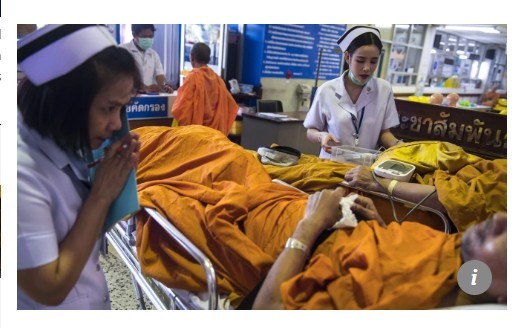 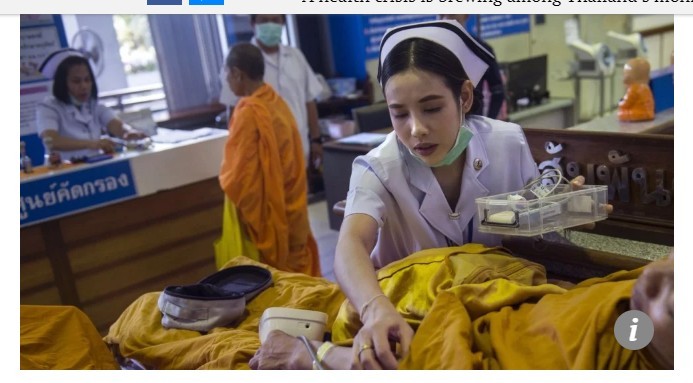 PERSONAL NOTE: This is a tradition in many Buddhist countries, giving foods to the monks who come to you…and as followers of Buddha, you want to feed the monks…it reminds me of old Christians in the ancient times…the more you gave to the churches, the more the open to heaven would be open to you! So the followers of Buddha are only too happy to feed you, generously…without thinking what it is doing to the average health of monks in Thailand! A health crisis! Steve, usa, november 23, 2018   stephenehling@hotmail    blog – https://getting2knowyou-china.com

A health crisis is brewing among Thailand’s monks, fuelled by the junk food offerings of Buddhist devotees
• Thais seeking to earn merit and honour their ancestors often provide food to monks on their daily rounds but they can be generous to a fault
• Heavy curries, sugary sweets, sodas and salty snacks are among the array of sumptuous – and unhealthy – alms
23 November, 2018 AFP Agence France-Presse SCMP

Every morning Buddhist monk Pipit Sarakitwinon takes walks around his temple and does hundreds of arm exercises, part of a new regimen aimed at shedding pounds as a health overhaul for members of the clergy gathers pace in Thailand.
Followers have been showering monks – who are deeply respected in the kingdom – with foods loaded with sugar, fat and oil, contributing to a brewing health crisis.
“Before I dieted I could barely walk 100 metres without getting tired”, Pipit, 63, said during a medical check-up at a hospital for monks in Bangkok, adding that he used to weigh 180 kilograms (397 pounds).
With cases of diabetes, hypertension and knee problems skyrocketing, Thai health and religious officials last December published a “Monk Health Charter”, instructing members of the clergy to watch what they eat.
Thais seeking to earn merit and honour their ancestors often provide food to monks on their daily rounds but they can be generous to a fault.
Heavy curries, sugary sweets, sodas and salty snacks are among the array of sumptuous – and unhealthy – alms.
“If they eat our food and are satisfied, we feel comfort that that food will be transferred to our loved ones,” said Prachaksvich Lebnak, deputy secretary general at the National Health Security Office.
“Some people even give monks cigarettes,” he added, in a symbolic offering to ancestors who were heavy smokers.
Thailand has some of the highest rates of obesity in Asia, according to the Asian Development Bank.
Members of the clergy are among the worst-hit – a 2016 survey of monks by the Faculty of Allied Health Sciences at Chulalongkorn University in Bangkok found rates of obesity soaring as high as 48 per cent, with 42 per cent suffering from high blood pressure.
Buddhist precepts forbid monks from eating after noon and Buddha himself was said to have told his followers to refrain from consuming meals later in the day.
But certain juices – referred to as pana in religious scripture – are allowed after midday, making them perfect delivery vehicles for sugar.
Pre-packed alms that include processed foods are also easily available at Thai stores, exacerbating the problem.
Although the new guidelines call on monks to look after their health so they can be “ready to deliver Buddha’s teachings”, refusing devotees’ offerings is a delicate subject.
“According to Lord Buddha’s teaching, whatever they offer, we have to accept. We can’t deny, we can’t reject,” said Phra Rajvoramuni, the assistant abbot at Sungvej temple in Bangkok who helped author the new charter.
Rajvoramuni hopes instead that health education – including training clergy to run basic medical check-ups – will bring about change.
“The monks also should do something, like exercise … like walking meditation, cleaning the temple in the morning, sweeping the grounds,” he said.
The guidelines follow smaller-scale initiatives in rural Thailand. Phra Bhavana Dhamakosit, the abbot at Wat Phochai in northeastern Nongkhai province, said his temple started medical check-ups three years ago, with obesity and high blood pressure being common issues.
Since monks tend to move from one temple to the next, many do not visit doctors or dentists for check-ups, he said.
Although the new plan also instructs followers to make healthier offerings, religious leaders are wary of applying too much pressure on the faithful.
“It’s better and more effective to ask monks to refrain from eating certain kinds of food,” Bhavana said.
Chulalongkorn University’s Jongjit Angkatavanich, who carried out the 2016 survey, said she expected “tangible change (to) take three years” at least.
Although the new guidelines are not mandatory, monks who are mindful of their weight are starting to see results. In addition to exercising, Pipit has been trying to eat smaller portions, especially when it comes to unhealthy offerings.
He says he has lost 30 kilograms (66 pounds) since he started to watch his weight earlier this year. “Now I am choosier with the food offered by villagers.”