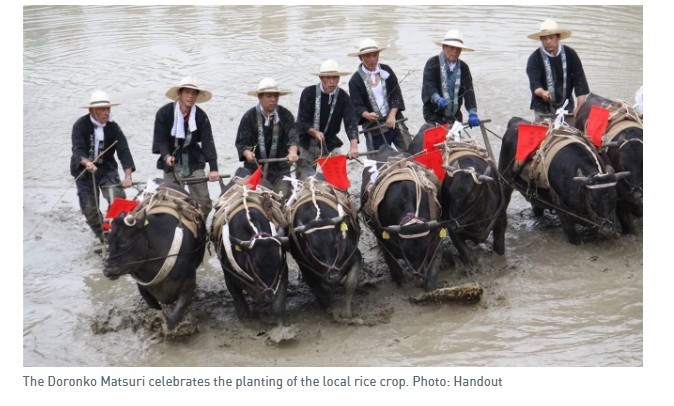 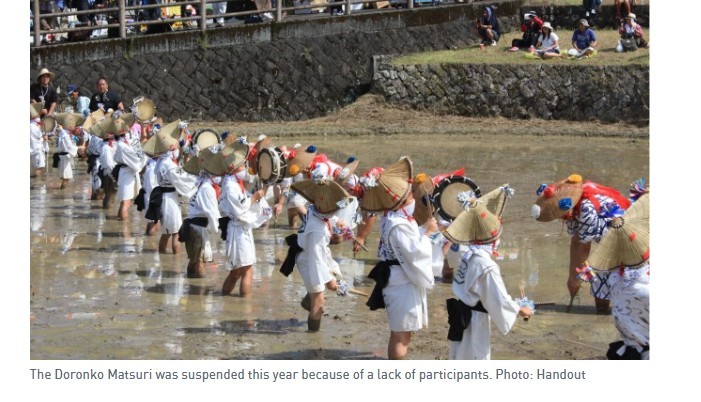 SPECIAL NOTE: Not only Japan is going through this crisis…that ancient festivals might soon disappear as villages are slowly disappearing in Japan and in many parts of the world. As a Chinese myself, for example, the younger generation are not doing many things that their grandparents did when they were young…It is the responsibility of parents and educational institutions to help to preserve some of these ancient traditional practices…for example, in some high schools in China, students are encouraged to learn Chinese Opera or certain martial arts in China…parents and certain educational institutions must help to preserve and maintain certain traditions and cultural beliefs in the modern world! Steve, October 7,l 2018  Blog: https://getting2knowyou-china.com    weChat 1962816801   stephenehling@hotmail.com

N JAPAN’S DYING COUNTRYSIDE, ANCIENT FESTIVALS STRUGGLE TO LIVE
Shrinking rural communities have put the future of many traditional celebrations in doubt
BY JULIAN RYALL SCMP OCT 7, 2018
•
For generations, festivals whose origins have been lost in the mists of time have been the lifeblood of virtually all of Japan’s communities. In the depths of February, for example, men clad only in loincloths take part in Okayama’s Hadaka Matsuri, or “naked festival”, by pouring water over each other to celebrate prosperity and fertility.
Dancers turn the streets of Kochi into a riot of colour during the annual Yosakoi Festival in August. Demons in terrifying masks and clothing made of straw prowl Shinzan Shrine and the streets of Oga, Akita Prefecture, every February.
For every famous festival that attracts crowds of locals and visitors from further afield, however, there are others at risk of disappearing as rural communities shrink, young people move to the cities to find work and funds for traditional forms of entertainment and worship run dry.
With rural Japan already in the grip of chronic depopulation, some communities have reluctantly decided to halt their forefathers’ traditions.
“We are not sure exactly when the festival started, but we think it was about 140 years ago,” said Miki Chiba, an official of the district office in Seiyo, Ehime Prefecture. “The residents of the town of Shirokawa were meant to have this year’s event on July 1, but they suspended it this year because there are just not enough people to take part.”
Why is racism so big in Japan?
The Doronko Matsuri – literally the mud festival – had long been a fixture of this part of the prefecture. The festival, which involves farmers using bulls to plough a paddy field, celebrates the start of the planting season for the local rice crop. The spectacle was less about ploughing, however, than the farmers and bulls getting coated in mud, while youngsters threw themselves into the fields.
At the end of the day, after everyone had been hosed down, villagers would gather at the nearby shrine to pray for a good harvest in the months ahead. A decade ago, more than 700 local people took part and thousands would turn out to watch, local officials said. Today, there are only 300 residents in the village and no one keeps bulls any more.
“The population of the town is shrinking every year as the birth rate declines and young people move away,” said Chiba. “And even though some people said we should go ahead with the festival, it was impossible because there are just not enough of them.”
“Everyone connected with the event has been really sad about the festival ending,” she added, hinting at the reality of an occasion that is still officially “suspended.”
According to the Nippon Matsuri Network, a non-profit organisation that is working to protect the nation’s rural heritage, there are as many as 300,000 festivals held across Japan each year, but the Sankei newspaper reported that around 40 traditional events in 20 prefectures were either halted or suspended in 2016. And with rural depopulation picking up speed, that annual figure is likely to increase in the years to come.
Japan gives yakuza criminal gangs the finger
“The most famous festivals on the Japanese calendar include the Aomori Nebuta Festival and the Awa Odori, while events such as Kyoto’s Gion Festival and the Chichibu Festival are very famous around the world,” said Hideo Nigata, vice-chairman of the Nippon Matsuri Network.
“But some of the less famous events are finding it hard to continue because there are not enough people left in their communities, there are too few young people and not enough money to organise these events each year,” he told This Week in Asia.
“My fear is that if a festival ends, then it is inevitable that the community that created it will also eventually disappear.”
“Our organisation was set up to encourage more people to go to these festivals, to make them famous once again, through television coverage, the internet or some other means,” he added. “Only people power can assist these festivals.”
The town of Kanegasaki-cho, in Iwate Prefecture, northeast Japan, is taking a proactive approach to protecting the Deer Dance Festival that has been part of its heritage since the Edo Period (1603 – 1868).
“The population of this town is quite stable because we have some industry – there is a Toyota factory here and connected businesses – but the deer dance is dying out in some of the surrounding villages,” said Hidekatsu Asari, the curator of the town’s history centre.
“In years gone by, there were a lot more festivals and traditions associated with farming in the district, but the few farmers who are left use tractors instead of livestock and fewer shrines have seasonal festivals.”
Why are Japanese torturing cats and posting the videos online?
Other traditions have fallen by the wayside, too, Asari said.
“Ancestor worship has also changed,” he said. “Obon [an annual holiday commemorating deceased ancestors] used to be the time when everyone would return to the village so the family could be together, but now it has become a time for people to go on holiday, rather than a community festival.”
Asari is determined to do what he can to preserve the ancient traditions for the coming generations.
“We believe that events such as the Deer Dance bring the people of the community back together and should be encouraged,” he said. “If you talk to the older people, they will tell you that they feel sad or lonely when festivals fade away because they were such a big part of their lives when they were growing up.
RELATED ARTICLES

3
•
“That is why we have started to go into local kindergartens and nursery schools to teach the children about the dance, getting them dressed up in kids’ costumes and showing them the steps so that they want to keep doing the festival when they are older and hand it on to future generations.”