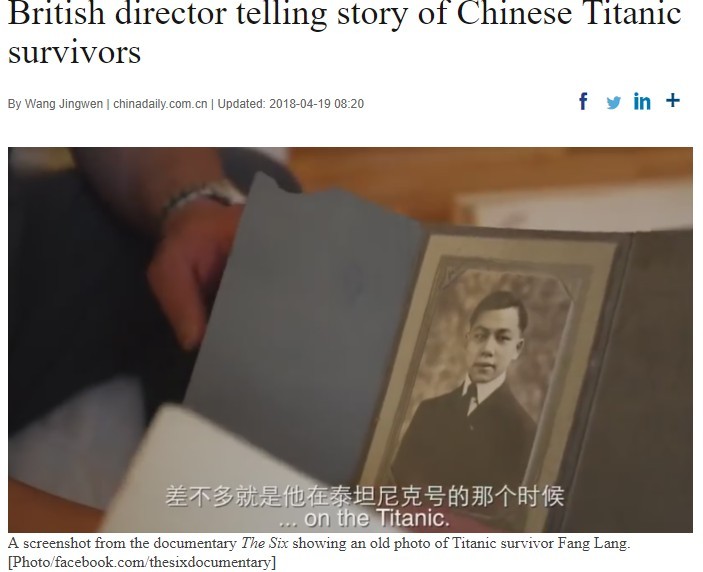 SPECIAL NOTE: The tragedy of the sinking of Titanic happened April 15, 1912. And when the 705 survivors arrived in USA, 6 of them who were Chinese were deported back to mainland China immediately! Reading this story tells me the heartless Americans living them…all because USA had signed a law…”they were not helped, like the other 705 survivors. Instead they were forced to leave the country within 24 hours, because of the Chinese Exclusion Act signed in 1882″. Heartless Americans…this is brutality and cruelty of one human to another human at the worst of times…having the tragedy, then swiftly shipped out of USA back to where they came from, working on board the Titanic! I pray this will never happen again, inhumanity to decent people who worked for you for a living! Peace, Steve USA September 5, 2018 stephenehling@hotmail.com    WeChat 1962816801 blog-https://getting2knowyou-china.com

(From Wikipedia:
RMS Titanic was a British passenger liner that sank in the North Atlantic Ocean in the early hours of 15 April 1912, after colliding with an iceberg during its maiden voyage from Southampton to New York City. There were an estimated 2,224 passengers and crew aboard, and more than 1,500 died, making it one of the deadliest commercial peacetime maritime disasters in modern history. RMS Titanic was the largest ship afloat at the time it entered service and was the second of three Olympic-class ocean liners operated by the White Star Line. It was built by the Harland and Wolffshipyard in Belfast. Thomas Andrews, her architect, died in the disaster.[2]
Titanic was under the command of Capt. Edward Smith, who also went down with the ship. The ocean liner carried some of the wealthiest people in the world, as well as hundreds of emigrants from Great Britain and Ireland, Scandinavia and elsewhere throughout Europe who were seeking a new life in the United States. The first-class accommodation was designed to be the pinnacle of comfort and luxury, with an on-board gymnasium, swimming pool, libraries, high-class restaurants and opulent cabins. A high-powered radiotelegraph transmitter was available for sending passenger “marconigrams” and for the ship’s operational use.[3] Although Titanic had advanced safety features such as watertight compartments and remotely activated watertight doors, Titanic only carried enough lifeboats for 1,178 people—about half the number on board, and one third of her total capacity—due to outdated maritime safety regulations. The ship carried 16 lifeboat davits which could lower three lifeboats each, for a total of 48 boats. However, Titanic carried only a total of 20 lifeboats, four of which were collapsible and proved hard to launch during the sinking.[4]
After leaving Southampton on 10 April 1912, Titanic called at Cherbourg in France and Queenstown (now Cobh) in Ireland before heading west to New York.[5] On 14 April, four days into the crossing and about 375 miles (600 km) south of Newfoundland, she hit an iceberg at 11:40 p.m. ship’s time. The collision caused the hull plates to buckle inwards along her starboard (right) side and opened five of her sixteen watertight compartments to the sea; she could only survive four flooding. Meanwhile, passengers and some crew members were evacuated in lifeboats, many of which were launched only partially loaded. A disproportionate number of men were left aboard because of a “women and children first” protocol for loading lifeboats.[6] At 2:20 a.m., she broke apart and foundered with well over one thousand people still aboard. Just under two hours after Titanic sank, the Cunard liner RMS Carpathia arrived and brought aboard an estimated 705 survivors)

Six Chinese survived the legendary tragedy of the RMS Titanic (April 15, 1912) , but disappeared soon after. Now a British documentarian, Arthur Jones, will uncover their stories and histories of discrimination.
There were eight Chinese between the ages of 24 and 37 on the Titanic, boiler workers sharing one 59-pound third-class ticket, according to the record of Titanic Cruise Line, but only six survived from its sinking. When they arrived in the United States, they were not helped, like the other 705 survivors. Instead they were forced to leave the country within 24 hours, because of the Chinese Exclusion Act signed in 1882.
Some westerners questioned the six Chinese survivors as stowaways and claimed that they survived because they secretly climbed on the lifeboat or dressed as women to board lifeboats.
But Jones believes they did not do anything disgraceful in order to survive the disaster after visiting foreign archives, museums and cooperating with American and Chinese historians. This is not only a story about the survivors of Titanic, but also a story of a group of brave Chinese people exploring the outside world at that time, he said

When the giant ship slammed into an iceberg, like other third-class passengers the eight Chinese were released from the locked gates at last, but not allowed to board the lifeboat. Luckily, four of them boarded a small broken boat, and one was rescued by another lifeboat. Another one, Fang Lang, floated on a piece of the ship’s wreckage in the sea. The only returning lifeboat saved him from freezing.
To restore their overlooked stories, Jones and his team found the son of Fang Lang in Wisconsin, US, after searching through China, the US, Britain and Canada. In May, Jones will visit Taishan city in south China’s Guangzhou province, recorded as the survivors’ hometown. The filmmakers also established a website, whoarethesix.com, for more clues.
Ordinarily, people think of Titanic as a story of rich white people, but don’t know there were people from all over the world, including Chinese. Their stories are never told, Jones said.
The documentary The Six is expected to be released in China late this year.
The names of the eight Chinese on Titanic were recorded as Fang Lang,Lee Bing, Ali Lam, Chang Chip, Choong Foo, Lee Ling, Ling Lee and Len Lam.
South China Morning Post and thepaper.cn contributed to this story.