SPECIAL NOTE: Both first ladies are beautiful and elegant! I am not a fashion watcher or writer or reporter. Both women have taste and they know what would look best this time of the year: cold weather. One of Mrs Trump dress looks like a house coat…wild design, not for my taste. Mrs Xi seems to know what is best for her appearance…dresses her age and dignity of being the wife of the most powerful man on earth! Enjoy the article and the clothes the women wore in Beijing! I like all of them. Steve November 10, 2017 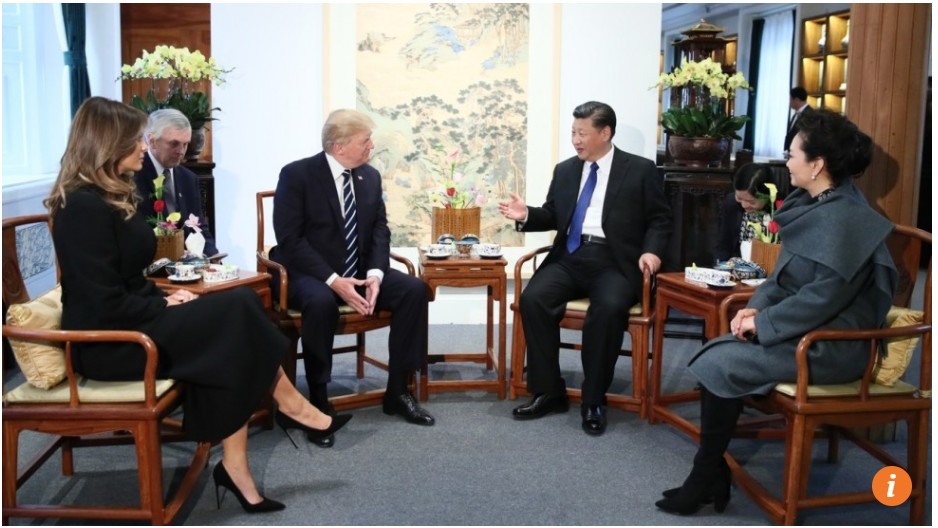 Melania Trump, the wife of the US president, made several floral sartorial nods to her host country on the couple’s trip to China, culminating in an opulent Chinese-style embroidered qipao by Gucci for a state dinner on Thursday night.

Looking every stiletto inch the ex-model, Trump sported a black floor-length dress stitched with brightly coloured flowers and a phoenix, a symbol of an emperor’s wife in imperial China. The dress’s sleeves were trimmed in pale pink fur, a look that combined Chinese tradition with Trump’s preference for Italian luxury labels.

Peng Liyuan, folk singer and wife of Chinese President Xi Jinping, also went for a striking qipao for the state dinner, making her most daring selection for some time. Peng wore a sheer, looser-cut black qipao over a dark wine-coloured sleeveless dress.

The fashion parade started earlier in the day when the two women visited a primary school.

The outfits were a contrast in style, type and lengths, but there was an attempt at harmony in the concepts. Trump’s feminine, black dress was much more conservative than her usual outfits, and referenced Chinese aesthetics with its graphic pale pink floral detailing. Peng also put the accent on Chinese style with her shiny, over-the-knee qipao inside her Western style coat.

But Trump’s look did not score highly with Shanghai-based fashion designer Fang Yang.

“To be honest, I didn’t like the big floral dress Melania wore to the school,” Fang said.

“It actually makes her look older and two sizes bigger than she is. Peng Liyuan looks quite conservative in that double-breasted coat, but the slits on the side revealing the dress inside are quite interesting and makes the outfit much lighter.”

Fang also preferred Peng’s modern grey coat with a dramatic draped neck to Trump’s beautifully tailored but sombre all-black coat and dress during the Forbidden City tour on the chilly first day of the trip.

“Peng looks warm, sophisticated and happy and the piece is very well designed,” Fang said. “Melania looks very conservative and serious in all black. It looks so heavy. I would have given her a colourful scarf or accessory to lighten things up.” 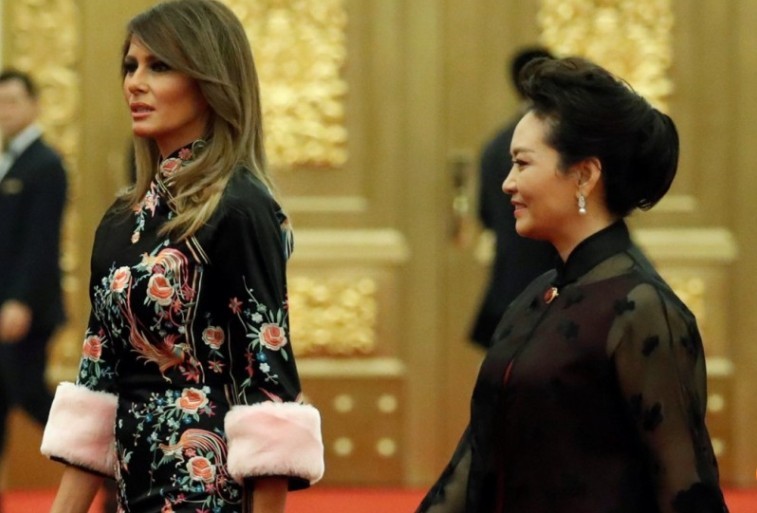 Visiting the Beijing Zoo on Friday, Trump opted for a more formal style with a black overcoat and a long grey skirt.

Overall, both presidential couples did well with their wardrobe strategies, she said.
“These two couples are more than professional in wearing whatever needs to be worn for their daily activities,” Liu said. “They have people behind them to support this part of the operation.”